Here it is! Home Assistant 0.103 is released, which is the last major release for this year. For the final stretch of this year, we’ve focussed on cleaning things up. This release contains many things that were still in progress (e.g., due to Hacktoberfest), lots of bugfixes; mainly things that help to improve the stability and experience of Home Assistant.

We wish you happy holidays! As always, we skip a release cycle at the end of the year, making this the final, major release of 2019. This gives all of us time to enjoy the holidays with our families as well. The first release of 2020, will be on 15 January.

Furthermore, we’d like to take the opportunity to thank all of our contributors, no matter how small or big the contribution; code, documentation, issue reporting, beta testing, supporters in our forum and chat. We salute and thank you and wish you the best for the new decade, as we are entering 2020! ❤️

Service’s have been moved to their respective integration namespaces

For 0.103, an extensive cleanup has been taken place around the names of the services. We realize this affects many users; therefore, we made sure all these changes are in this release. This change was driven by @raman325, who did an excellent job of completing this in time for 0.103.

We used to have services that were placed inside other domains, which wasn’t always the case, and therefore inconsistent. So, for example, the service to add an item to Todoist was actually a service call under the calendar domain: calendar.todoist_new_task.

This release, all services that were not placed correctly, are moved into their respective integration domain. So, for the above example of calendar.todoist_new_task, has been renamed to todoist.new_task.

We hope this brings a more streamlined experience to the use of services, for now, and in the future. For a complete list of old vs. new service names, a table as been added to the release notes, below.

Internally, Home Assistant uses a lot of Python packages, that our integrations are using. In the past weeks, the locations where all those imports take place, was changed. This does not directly resonate with your system and is mainly an internal cleanup.

A big shout out to the following contributors that together are responsible for making hundreds of contributions the past weeks to help us out:

Thank you so much!

Since version 0.101, support for Python 3.6 has been deprecated. We are currently working on Python 3.8 support, which is expected soon.

Therefore, this release marks the last release, which supports Python 3.6.

If you haven’t upgraded your system to Python 3.7 yet, it is recommended to do so, to ensure you can keep using Home Assistant in the future.

If you are using Docker or Hass.io, you don’t have to worry about this, since we provide a matching and working Python version for you.

As announced during the State of the Union 2019, Frenck has joined Nabu Casa.

Today marks the first day of my full time open-source adventure! 🥳 Heading into my office this morning, full of energy and lots thankfulness for this opportunity! I feel blessed to be able to work on @home_assistant for @NabuCasa 🙏 pic.twitter.com/mjkMYeCNaz

We gave some love and attention to the automation editor, fixing some bugs and adding some useful features.

We add area support for automations that you create with natural language, and we try to pick the right area or device for you if you mentioned the name.

So you can now say: “Turn the lights on in the living room”, and it adds all the light devices of your living room to the automation. By clicking Choose individual devices, you can add or remove devices. 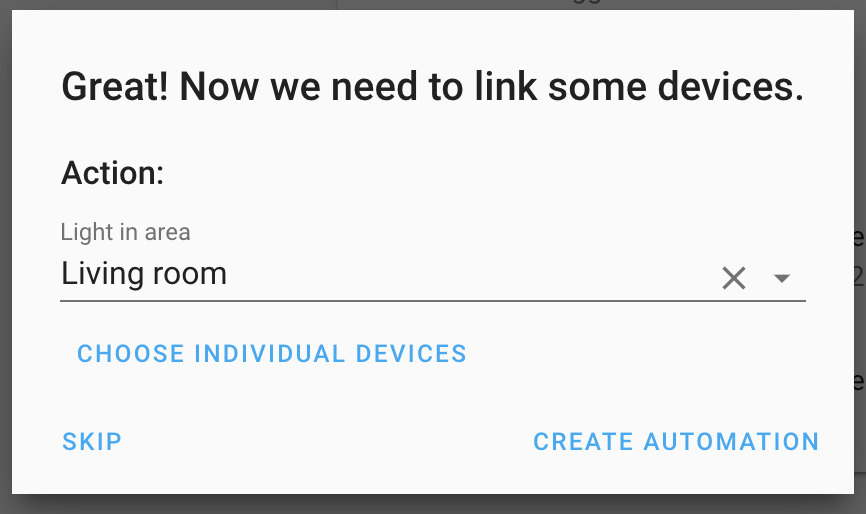 Screenshot of the result of the above query.

You can now edit every individual trigger, condition or action as YAML. This makes it possible even to do very complicated automations in the automation editor and allows you to copy parts of your automation quickly. 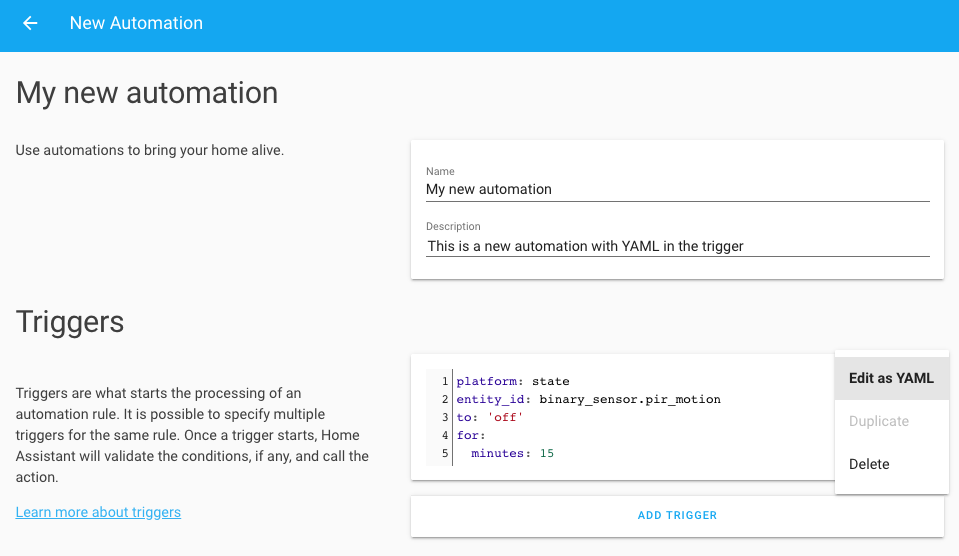 Screenshot of the automation YAML editor.

We also added the ability to rearrange your actions, so you don’t have to start all over when you want to add a delay between 2 service calls. Talking about the service call action, that has now an entity picker to help you search for the right one. 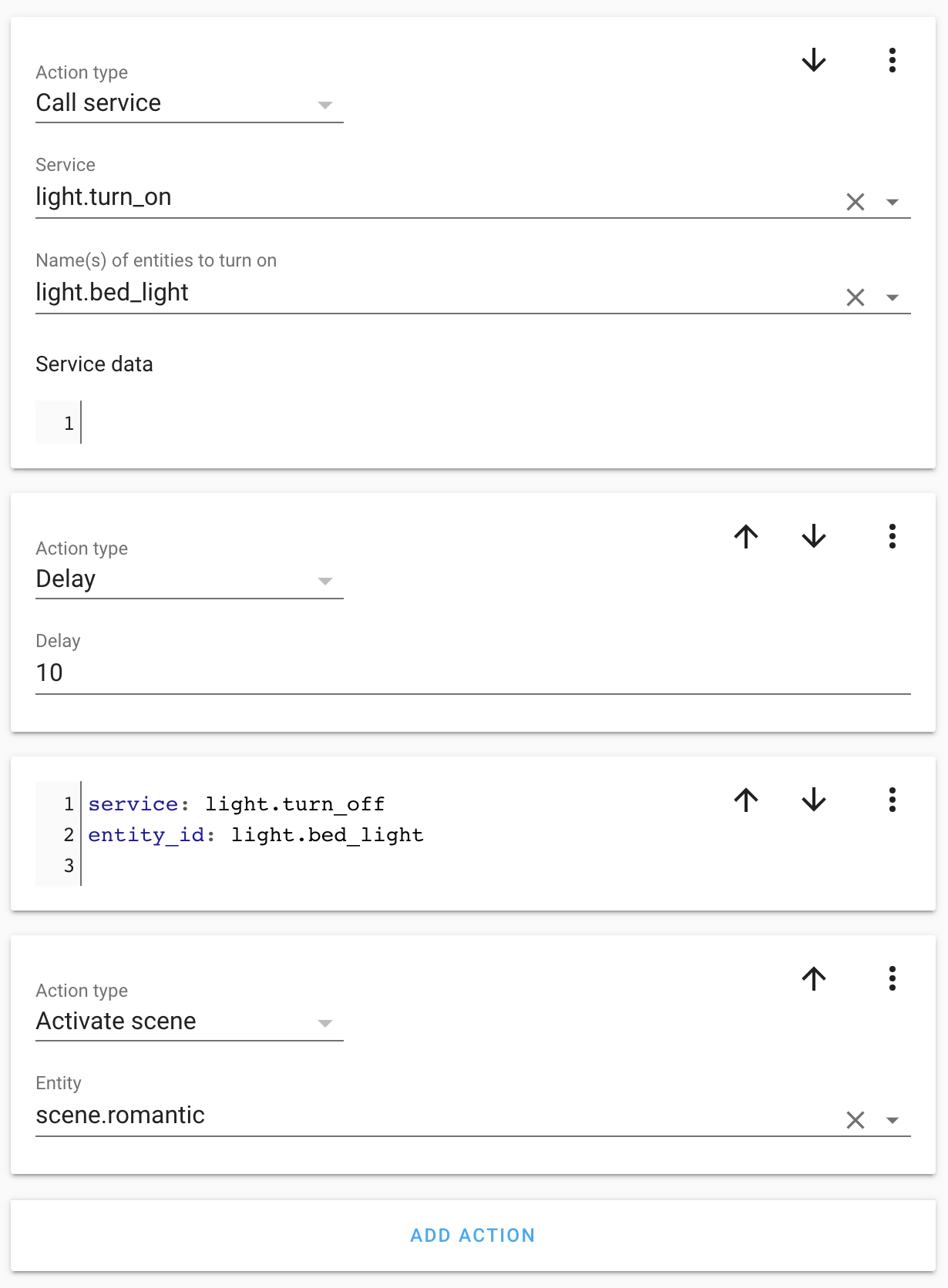 Looking for a present for the holidays? T-shirts with our rainbow logo are now available in our online store. 🌈

.@home_assistant for iOS version 2019.1/2.0 is now (finally) available in an App Store near you! Also releasing today: beautiful new documentation for the app! Check it out at https://t.co/4RhY8tOand. pic.twitter.com/YkuhhdRjwu

The following integrations are added in this release:

The following platforms have been added to existing integrations:

If you are an existing user, make sure to read the this section before upgrading, this helps you understand the changes and avoids having issues during an upgrade.

All services for use in Home Assistant are moved to their integration naming space.