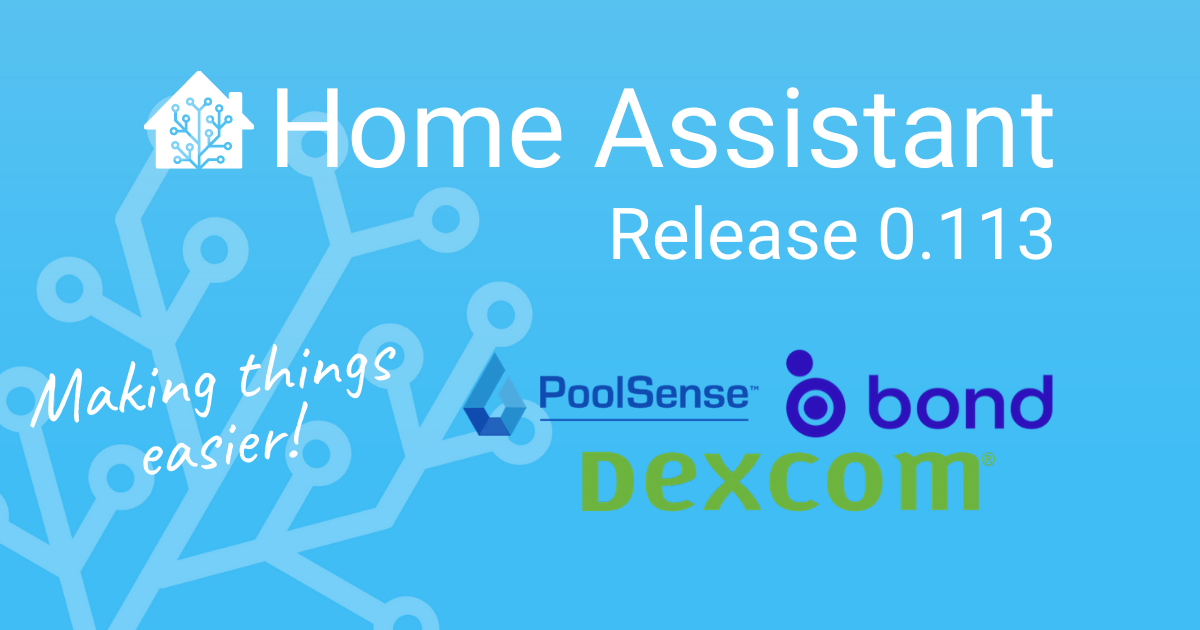 It seems like @bdraco is unstoppable; he just keeps going on improving the performance of the Core. I truly admire him for the work he has been delivering the past months, however, that is not the point of this release. Sorry, @bdraco!

This release is about: Automations & Scripts! Yes!!!

A long, long time bug with automation triggering has been resolved, but not only that, @pnbruckner went all-in by extending the automation/script engine even more.

Adding repeat, a chooser and running modes (with cool down possibilities as a side-effect).

I’ve been playing with these features on my home already and I’ve changed/improved quite a few things. For real, @pnbruckner, thank you!

Ludeeus has been a core contributor for a long time working on the Supervisor panel and different bits of the frontend. He is, however, mainly known as the creator of the Home Assistant Community Store (HACS).

We’re looking forward to seeing what he can do now that he is able to focus full-time on Home Assistant.

This release brings changes to our automations and scripts. Before we start with this all, please note, that the action part of an automation is a script sequence.

So, all discussed below, apply to both scripts and automations.

Before diving in: All automation and script changes, have been driven by @pnbruckner! It is awesome! Thanks!

There has been an issue with our automations for a long time already, which you actually might have never noticed. It is kinda hard to explain, so this needs an example.

So it takes 10 seconds for the bulb to turn off, what if you press the button again after 5 seconds?

Please, think about this for a moment…

What actually happened before 0.113, is that the light bulb would turn off immediately! Chances are, you didn’t expect that.

Let’s explain this: So the first button push, turns on the light, and the delay is active for 10 seconds. The second button push, done after 5 seconds, is actually not handled, however, it does cause the delay of the first run to cancel itself and continues to run the rest of the actions/sequence, causing the light to turn off immediately!

That bug, has been fixed. As of this release, the second button press wouldn’t do anything and the light will now turn off after 10 seconds, which the first button push has triggered.

With the above-mentioned bug fix, it now becomes possible to introduce new running modes for both scripts and automations. It allows you to control what happens if actions of a previous trigger are still running.

Considering the light bulb example in the bug fix paraph above, it shows the default mode: single, which means: Do not run and ignore the trigger if a previous action of the same automation is still running.

Besides the default single mode, the following modes are now available:

For the queued and parallel modes, an additional parameter max is available to control the maximum number of runs that are awaiting each other. When omitting this setting, it would default to 10.

To clarify a little more, remember the first example in the bug fix paragraph where the light bulb would turn on for 10 seconds after a button press?

This would make every button press within the 10 seconds, restart the countdown again:

And this example, would turn on/off the light, for 10 seconds twice, if the button was pressed after 5 seconds.

The modes are also available for automations and scripts in the frontend UI: 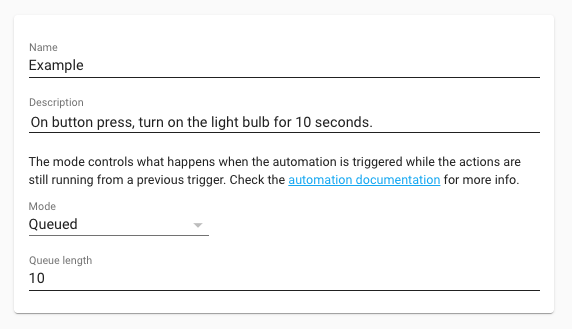 Screenshot of running modes in the frontend.

This is a powerful feature, which allows you to control how automations and scripts are run in ways you could not do before.

More information about the running mode can be found in the automations and scripts documentation.

A brand new action is made to allow for repeating (also called loops) part of your automations or scripts.

The new repeat feature can be used in three different ways:

For example, this would spam your phone with the same message 10 times:

More information about repeats can be found in the documentation.

You can now combine them using a chooser. The chooser is able to pick the first sequence that matches a condition, or if none match, run a default sequence.

This means each individual sequence in the chooser is paired with its own set of conditions.

In the above example, pushing button1, turns on the bulb; while button2 turns it off again. The third button isn’t handled by any of the conditions in the chooser and the (optional) default is run instead.

More information about the chooser can be found in the documentation.

Thanks to a bunch of optimizations done this release, which is discussed later in this blog post, we now have sub-second precision available to our delays.

This precision is helpful in case you want a delay that is less than a second, for example, 500 milliseconds.

An example script that toggles the light every 500 milliseconds 10 times.

An often requested feature is to allow for a cool down time on an automation. What that entails is setting a limit on the run of an automation or script to a certain time frame.

While this is not a feature specifically added or build, it can be achieved now using the new run modes.

The single run mode of this automation, combined with the last delay of 10 seconds, prevents this automation from being ran more often than only once every 10 seconds. This is ideal for things like a doorbell.

It has taken some time for us to upgrade to the newest version of Material Design Icons, 5.3.45, there was a reason for that, version 5.0.45 contains a lot of breaking changes.

We wanted to handle these well, so it took some time.

A lot of icons are renamed, and some are removed. In this release, we included all new, and all removed icons and we made sure the new and the old name work.

If you use an icon that is renamed or removed we will show a warning in the log, in version 0.115, this conversion path will be removed and removed icons and old names will no longer work.

So make sure to check your logs if you need to adjust any of your used MDI icons.

Most of the removed MDI icons can be found in Simple icons, which is available as a custom integration.

The UI to edit or create a script has been updated, besides support for the new running mode, you can now give your scripts a custom icon and ID from the UI.

Especially the ID is helpful, you no longer have to search your states for a long numeric entity id that matches your script. 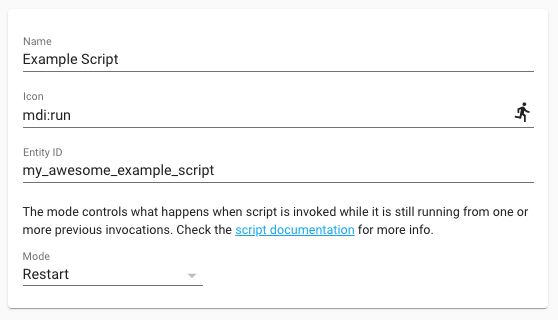 Screenshot of a script ID, icon and run mode.

The support for setting a custom icon, is also added to the scenes editor.

After, the well-received, speed optimization done in the 0.111 & 0.112 releases, the saga towards improving resource usage and responsiveness of the platform continues.

This time we have both @bdraco and @pvizeli to thank for some great optimizations that will reduce the CPU usage of Home Assistant.

First of all, if you are running a Home Assistant OS, Container or Supervised installation, then your Home Assistant instance will run on Python 3.8. No action from your end is needed for this.

It is not just a normal Python version, but @pvizeli has worked on a highly optimized Python version for Home Assistant, hitting performance improvements that can reach up to 40%! He wrote a more technical article about this on our developers blog.

Then @bdraco did his part on adding some improvements to the Core. He changed a lot of handling around event & state listeners, in such a way less things trigger unneeded, which reduces processing when states change.

This lowers CPU usage and improves response speed when you have many state changes happening in a short time span, or when having a lot of automations.

This release should drastically lower the CPU usage of Home Assistant for most installations.