Scripts can be created via YAML configuration (described below) or via the UI.

The sequence of actions is specified using the Home Assistant Script Syntax.

Script names (e.g., message_temperature in the example above) are not allowed to contain capital letters, or dash (minus) characters, i.e., -. The preferred way to separate words for better readability is to use underscore (_) characters.

Friendly name for the script.

Icon for the script.

A description of the script that will be displayed in the Services tab under Developer Tools.

Variables that will be available inside your templates

Information about the script field parameters; see the Passing variables to scripts section below. Please note: In order for this description to be displayed in the Services tab of the Developer Tools, the script description must be defined as well.

A parameter field used by this script. All sub-options are only used for creating a representation of this script in the UI.

The name of this script parameter field.

A description of this of this script parameter.

Marks this field as an advanced parameter. This causes it only to be shown in the UI, when the user has advanced mode enabled.

Mark if this field is required. This is a UI only feature.

An example value. This will only be shown in table of options available in the Services tab of the Developer Tools.

The default value for this field, as shown in the UI.

The selector to use for this input. A selector defines how the input is displayed in the frontend UI.

Controls what happens when script is invoked while it is still running from one or more previous invocations. See Script Modes.

Controls maximum number of runs executing and/or queued up to run at a time. Only valid with modes queued and parallel.

When max is exceeded (which is effectively 1 for single mode) a log message will be emitted to indicate this has happened. This option controls the severity level of that log message. See Log Levels for a list of valid options. Or silent may be specified to suppress the message from being emitted.

The sequence of actions to be performed in the script.

As part of the service, variables can be passed along to a script so they become available within templates in that script.

There are two ways to achieve this. One way is using the generic script.turn_on service. To pass variables to the script with this service, call it with the desired variables:

The other way is calling the script as a service directly. In this case, all service data will be made available as variables. If we apply this approach on the script above, it would look like this:

Using the variables in the script requires the use of templates:

Script variables that may be used by templates include those provided from the configuration, those that are passed when started from a service and the this variable whose value is a dictionary of the current script’s state.

Waiting for Script to Complete

When calling a script (or multiple scripts) via the script.turn_on service the calling script does not wait. It starts the scripts, in the order listed, and continues as soon as the last script is started. Any errors that occur in the called scripts that cause them to abort will not affect the calling script. 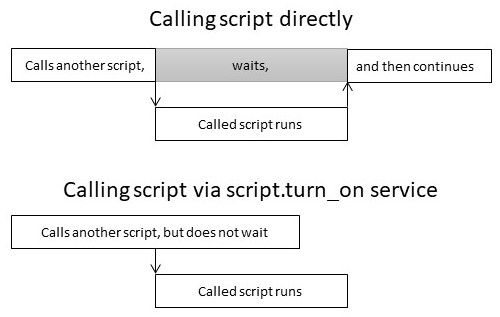 The Scripts system was introduced in Home Assistant 0.7, and it's used by 99.6% of the active installations. It scores internal on our quality scale.
View source on GitHub
View known issues