We have four submissions for our Hardware Contest 2017.

The voting is now open. To keep things simple are we using the voting feature of the forum. Vote for your choices. 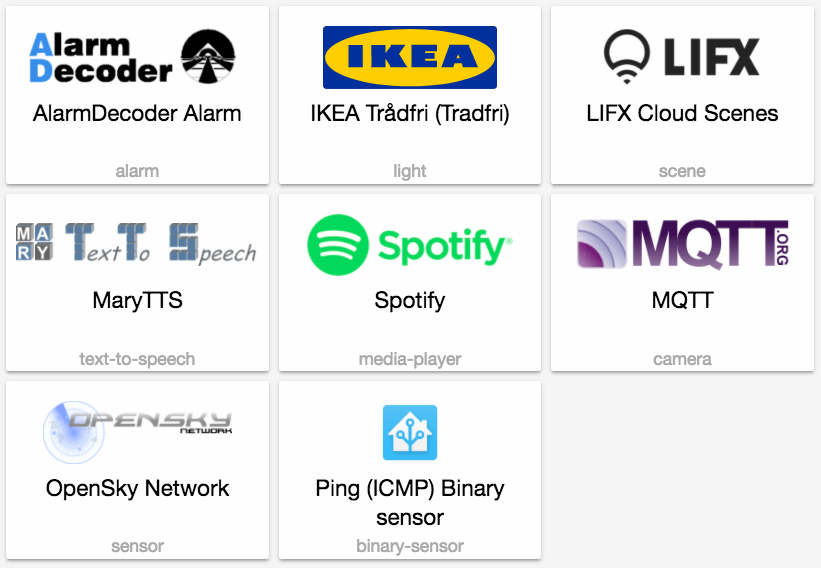 Oooh yeah. It’s time for 0.43 and this is going to be a killer release. For the people that have been following on social media, you might have noticed that we got pretty excited about the new IKEA Trådfri line up. And so we are very happy to announce that thanks to the work by @ggravlingen, @MartinHjelmare and myself that this will be the first release to support the IKEA light bulbs. Home Assistant will automatically detect the gateway on your network and after following the instructions, allow you to control your lights. 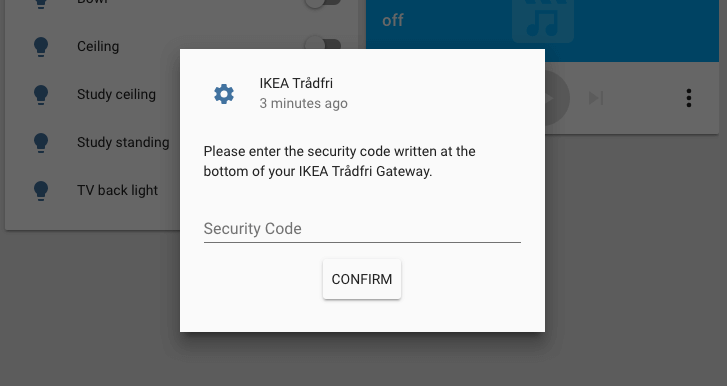 After automatic discovery, Home Assistant will ask the user to finish pairing with the gateway.

And in case you have missed the other big news: @robbiet480 released the first version of our iOS app! It took a little over a year but it offers some great ways to make your iDevice work with Home Assistant. Big congrats to Robbie for shipping! As with our other parts, the app is open-sourced under APACHE 2 and contributors are welcome. Check it out.

The new Spotify integration is based on the new Spotify Connect Playback API. It supports playback, album art and switching which Spotify device you’re controlling.

Also note that you have till the end of the weekend to submit an application to our giveaway of low energy servers which we got when we won the Thomas Krenn award 2017. Go apply!

Last month IKEA released a new home automation lineup called Trådfri. It consists of white bulbs, dimming remotes, color temperature remotes and motion sensors. After almost two weeks of research, we have come to the conclusion that this is going to be the perfect companion hardware to work with Home Assistant. Here is the gist of our breakdown:

(Note: we are not affiliated with IKEA nor do we receive commission for sales. We are just big fans of their new line up!)

I thought the existing notification and location solutions were lacking in one way or another and had wanted for years to have a project I could call my own which would allow me to learn iOS development. What better way then implementing an extremely complex application like Home Assistant?

I started with a lot of steam. I remember cranking out the initial work that night and showing Paulus who was astounded at how fast the UI was coming together.

Little would I know how many problems I would create and uncover throughout the process. Writing a mobile app for a project that moves as fast as Home Assistant is… tricky, to say the least. In the time since I started writing the app, Home Assistant had 90 releases. I started writing the day before 0.16 was released. Now we are at 0.42.3. Time flies…

I couldn’t have completed the app without help and input from the community. By the end I had 700 beta testers, of which about 500 were very active in testing the app.

I received emails and forum posts almost every day, even when the app would go without an update for weeks and sometimes months at a time as my life got busier and busier.

I wanted this app to be done 9 months ago, at least, but my drive to add more and more features killed that idea. This really taught me the value of the MVP over the kitchen sink.

It may not look the way that I wanted it to initially, with beautiful native UI components, but that’s okay. What I really cared about is there. The notification and location engines are some of the most customizable and powerful available in an iOS app if I do say so myself. I made them this way to keep with the spirit of infinite flexibility that is enshrined in Home Assistant.

Just because the app is released doesn’t mean we are at the end of the road. It’s only the beginning. There’s plenty of bugs to fix still, improvements to make, features to add. Beta testing will continue, and if anything, be expanded. I do want to have a native UI someday, but that’s pretty hard with how fast the project moves.

The biggest request I have is for more developers on the project. As many of you know, I have my hands in many different parts of Home Assistant, from governance and organization to managing the forums to writing this app, managing the Homebridge plugin and even sometimes writing code for the actual core codebase! I can’t do it all, and I’m still a new iOS developer who doesn’t know all the best practices.

The app is open source, has been for the last few months when I first prepared to submit it to Apple for review. I invite Swift developers to come and join me in building it. Trust me, there’s tons to do.

Today, April 16th, 2017, I am extremely excited to announce that Home Assistant for iOS has been approved by Apple and is now available to download for free! (had to get a joke in here somewhere!) on the iOS App Store in every country.

Please note, you must have Home Assistant 0.42.4 or later installed for the app to function properly.

Thanks for everything so far, I’m looking forward to the road that lies ahead for Home Assistant on iOS!

It’s time for Home Assistant 0.42. This release has been focused on refining the system and fixing a lot of bugs. We have also upgraded to the latest version of our HTTP library which should give us a significant boost serving files and API.

Also want to take a moment to thank Austin Andrews aka Templarian for his Material Design Icons. He is part of what makes Home Assistant so beautiful 🤗.

You may already know from our social media channels and the release blog post for 0.41: We are now an award-winning Open source project. The jury of the Thomas-Krenn-Award put us on the 2nd place. This is an awesome achievement for an independent community project.

I would like to thanks all contributors. Your endless effort made this possible. 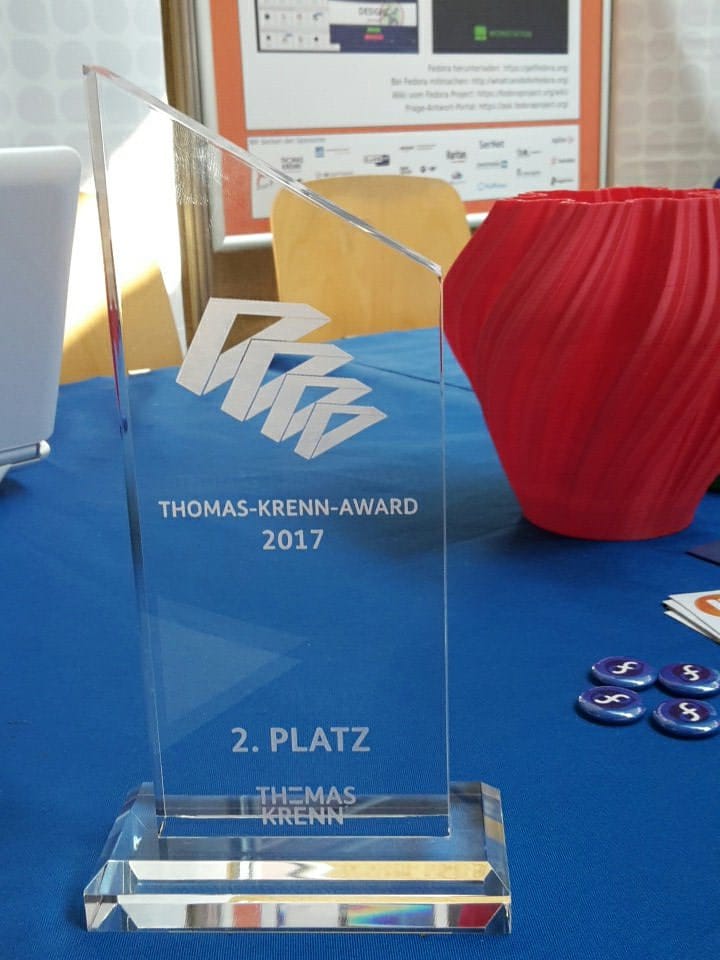 The prize beside the very nice trophy contains hardware and we want to give that hardware partically away. We won four Low Energy Server v2 (LES) units with an Intel Celeron N2930, 8 GB of RAM, and a mSATA of 128 GB (one unit with 64 GB). We were thinking about to keep one of those units in Europe and one in North America for testing and to use during workshops and events. But the other two will go to interested parties.

As a raffle would be to easy, we make a contest out of it. This means that we are looking for your application. Of course, we would like to see those systems goes to active or future developers who can justify their need for one of the systems to run CI, UI tests, public accessible Home Assistant demo instances, etc. At the other hand we would like to keep it open, to see with what people are coming up. Please participate as well if you are planning to automate the public school of your kids with 1000 switches or light, need a server to run it, and want to provide regular feedback about the user experience.

Create an entry in our Forum. Be creative and use your imagination.

The decision of the jury will be final. If there will be a dispute then the Top-5 committer of the Home Assistant organization on Github will decide. Also, we reserve us the right to ban applications if we suspect cheating or unfair methods. Updates will be available in the Forum and on Twitter.