In case you have missed it, we decided to change the names we use here at Home Assistant, you can read all about it in this blog post.

Therefore, this is release 0.105 of the Home Assistant Core!

This means, it is now over a year ago that Lovelace was officially introduced as a replacement for the states UI, so it is time to say goodbye to the old states UI. This release deprecates it and in version 0.107, the states UI will be removed from Home Assistant completely.

If you are not using Lovelace yet, we advise you to switch to it today. Lovelace is, by default, almost the same as old states UI with the bonus of a lot of flexibility, if you want it.

In addition to this, all configuration options for the States UI are deprecated as well. Please be sure to read the breaking changes to see if you have options that need to be removed from your configuration.

We are humans, and we do make typos. However, if we make a typo in our configuration, we might end up with Home Assistant being completely unreachable. That really is not helpful. You lose access to Home Assistant and have to do a deep dive via other methods to find out: Why did this happen?

This release introduces a “Safe mode” for Home Assistant. If during startup, Home Assistant has problems reading your configuration (for whatever reason), it will still continue to start using bits and pieces from the configuration of the last time it did start.

When this happens, Home Assistant will start in “Safe mode”. In this mode, nothing is loaded, but it does give you access to the Home Assistant frontend, settings and add-ons (for example, the VSCode or Configurator add-on). This gives you the possibility to correct the issue and restart Home Assistant to re-try. 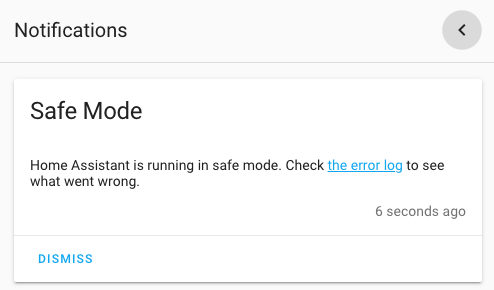 Please note, that this feature isn’t perfect yet, and only works if Home Assistant was able to start successfully, after upgrading to this release, at least once.

We believe this feature makes Home Assistant more robust, easier to use and more forgiving, even if you made a mistake.

Remember we used to have a Hass.io panel? Well, with the new naming for Home Assistant, it has been renamed to the Supervisor panel.

So @ludeeus has been busy! He rewrote the entire Supervisor panel to match our current frontend technologies and added some really slick new visual elements to it.

Thanks, @ludeeus, it looks incredible! 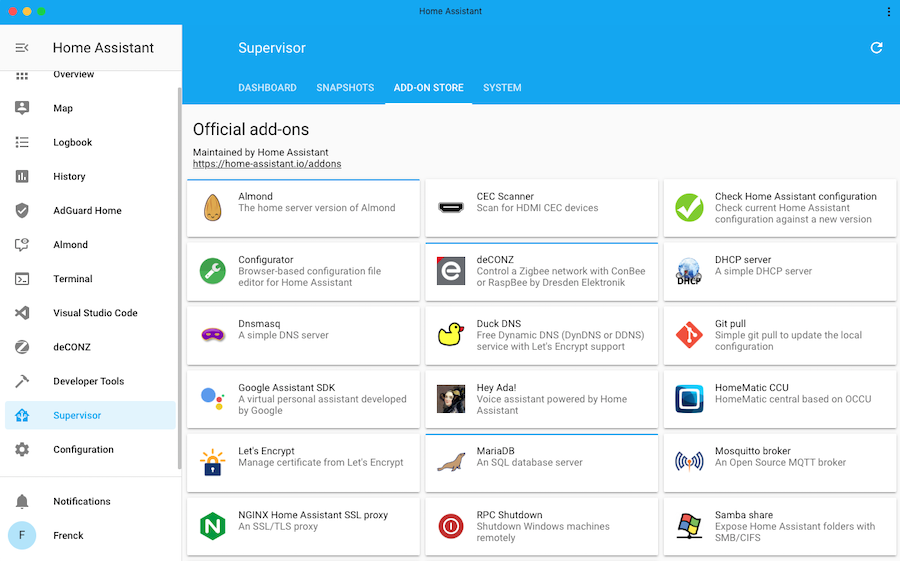 Screenshot of the revamped Supervisor panel.

The new icons on the add-ons really make the add-on dashboard & store stand out. Also, new status indicators on the add-on cards make it easy to spot add-ons that need to be upgraded, or in case of visiting the add-on store, are installed already.

Please note, you need to be running Home Assistant Core 0.105 to see the new icons.

In upcoming releases, we will make changes to make things easier to find and connect the different elements with each other, making it easier to navigate around. For now, we implemented configuration sections, a new tabbed UI, as well as some visual tweaks.

Also updated, the device page to show the automations, scripts, and scenes a device is used in and added the ability to create new ones with the device easily. 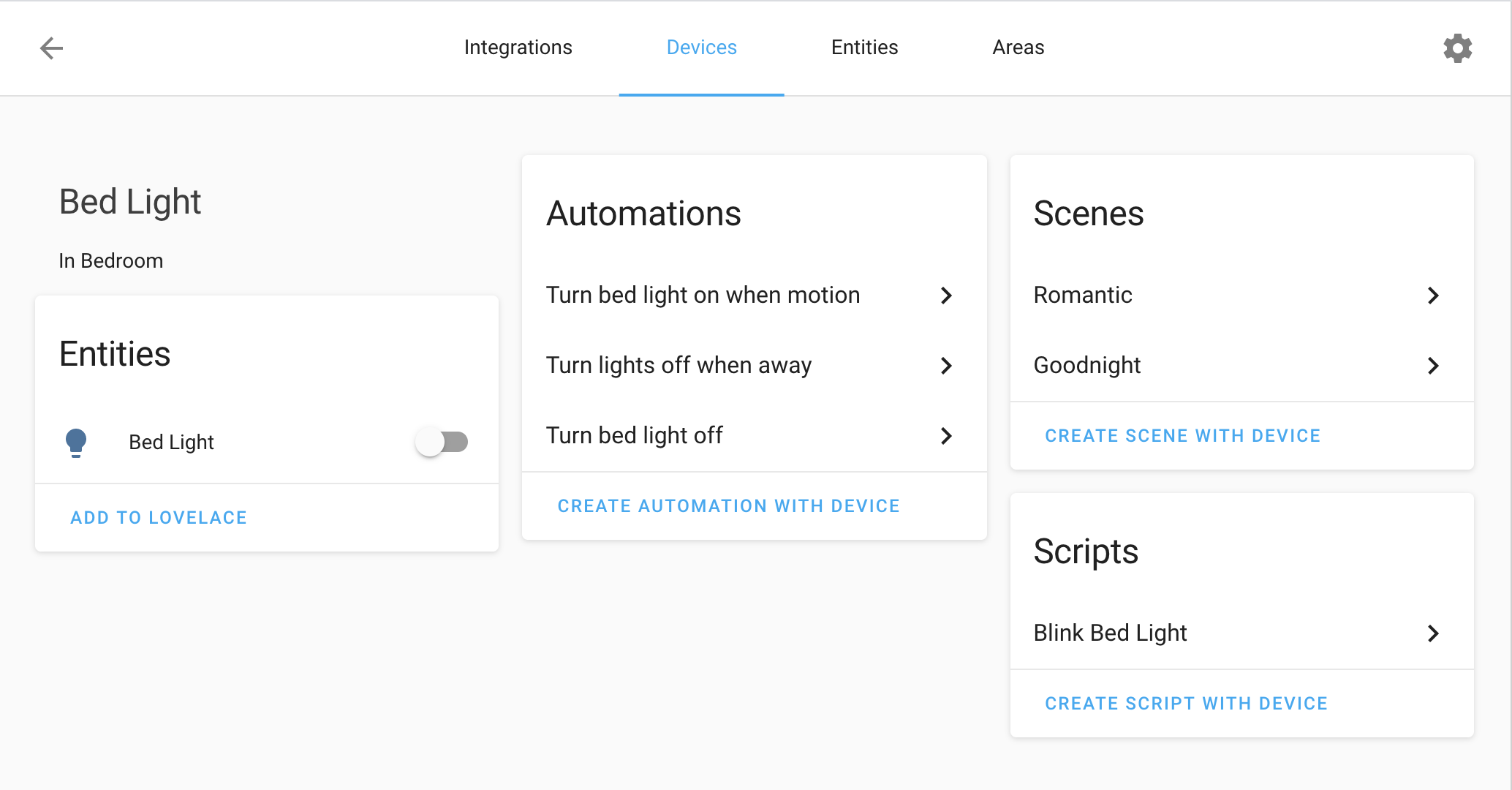 In the more info dialog of entities, we changed the settings button to open the entity settings dialog, and added a related tab as well! This allows you to can see what device, integration, area, scenes, scripts, automations, entities, and groups belong to that entity.

For scenes, scripts and automations that are created in the UI, an edit button is added, right in the more info dialog so you can easily edit it without searching for it.

Header & Footer for the entities card

Two new types are added to the entities card, a header and a footer. At this moment, we have two options for these, an image and buttons.

It allows you to create some very cool looking cards, but also provides you the option to put buttons in the bottom of the card. Very useful for buttons that activate scenes, for example. 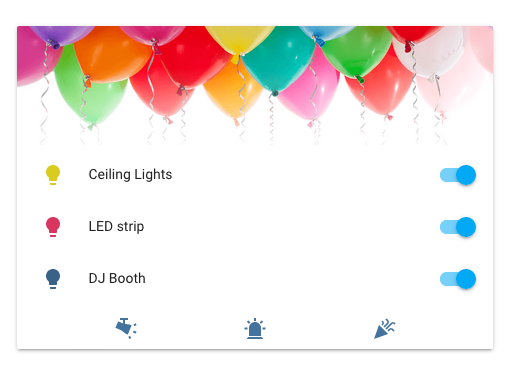 Screenshot of the new header and footer for entities card.

A brand new zone editor! You can no longer find your zones in the integration list, but they moved to their own section in the configuration panel.

In this new editor, you can move your zones with drag and drop and even change the size of your zones by dragging the circle.

Adding, and removing zones or changing the name of a zone, is now easier than ever.

Screen recording of the zones editor.

As an extra added bonus, a new service was added: zone.reload. This service allows you to reload your zone configuration without restarting Home Assistant.

Icons no longer change color based on state

A change that is not really apparent at first, but you probably notice it sooner or later.

The entities card no longer changes the colors of icons based on states, except for lights.

Reasoning comes from a request, to make icons to become yellow for all types when an entity is active, and not for just a few entity types. However, this would get out of control very quickly, as shown in the screenshot below. 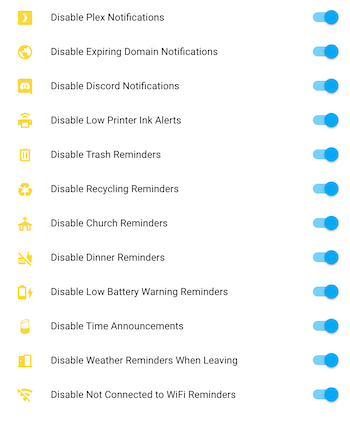 Yellow icon color on everything, isn't the solution either.

So, that is why we disabled it, by default, for all entity types, except lights. However, we did add a new option: state_color. Using this option, you can decide if you want to old behavior back, add it to more entity types or maybe even disable it for lights too!

Other cards will now display icons from more domains with an active color.

Other Lovelace and frontend improvements

There is a lot more done on Lovelace, more than we can mention, some other highlights:

For a full list of changes, see the Lovelace changelog.

This section is now empty, but don’t be sad! The in “In other news” section now has its own dedicated blog post, which we will put out regularly:

Have you seen (or made) something awesome, interesting, unique, amazing, inspirational, unusual or funny, using Home Assistant? Send us your Community Highlight suggestion, so that we can include it in the next blog post.

Hats over your heart for these shuttered integrations. Pour one out for: