In our house, laundry has been a struggle for quite some time. Our washer and dryer both lack a buzzer which leads to forgotten laundry, and stinky mess that needs to be rewashed. I decided to create a solution by monitoring the washer and dryer myself with some cheap electronics.

As an avid user of Home Assistant, I decided it would be the perfect application to manage the UI and notification system. Now all I needed was a way to monitor the washer and dryer. I tried using sound sensors but found them unreliable. I ended up opting for an accelerometer attached to the back of each appliance. I also added magnetic reed switches on the doors of the washer and dryer to detect if the doors are open or closed. I connected the accelerometers and reed switches to a Moteino, an arduino clone with an RF transceiver. The Moteino can perform the logic to figure out which state the appliances are in and wirelessly communicate that data with another Moteino that is connected via serial to my Raspberry Pi. The Raspberry Pi reads the serial data and repeats it over MQTT for Home Assistant to use. This is great because I don’t have to run Home Assistant on the Raspberry Pi. I can run it on a faster machine and point the MQTT component to my Raspberry Pi.

After taking some sample data from the accelerometers while each appliance was in operation, I decided to plot the data to help determine the proper thresholds of when the devices were running or off. I had to do this in order to get precise ranges so the dryer sensor wouldn’t get tripped by the washer or vice versa. In the plot below you can see the acceleration in the x direction for the accelerometer connected to the washing machine. It’s easy to see when the washing machine is in operation here. I used the same technique for the dryer’s accelerometer. 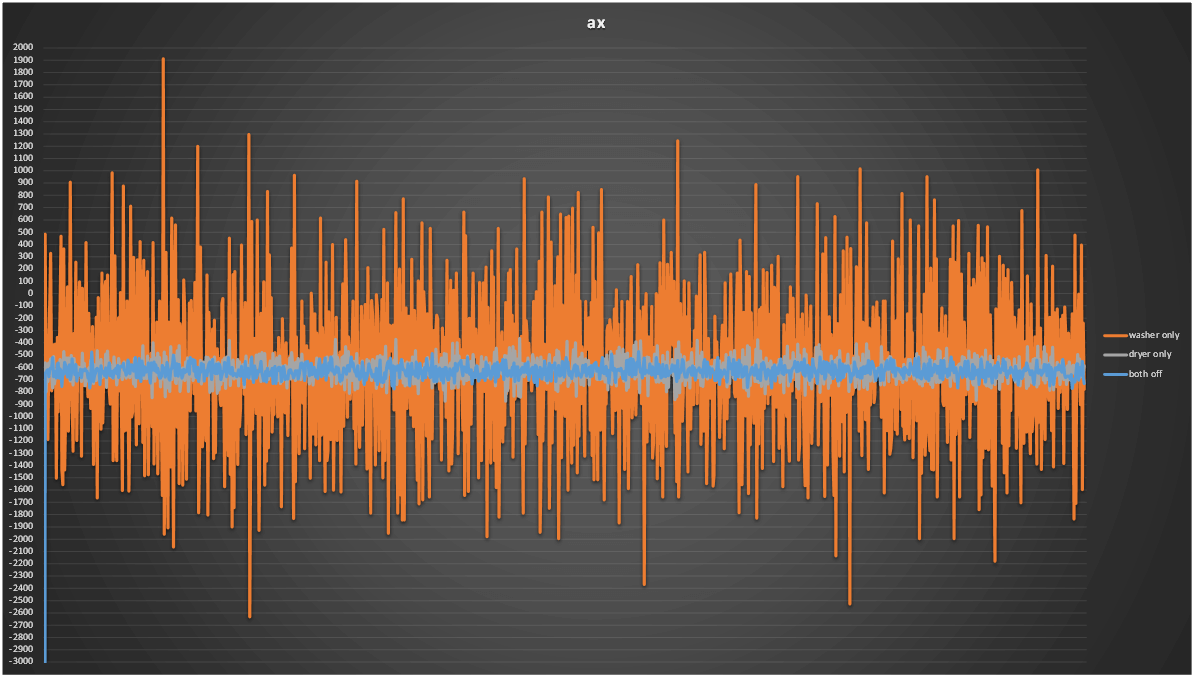 A minor bug fix release to fix some issues that have come up since the last release. Please upgrade as soon as possible by running git pull from the Home Assistant directory.

This release is a major milestone in our test coverage as we’ve crossed into the 80s! It has to be noted that this covers mainly the core and automation components. Platforms that communicate with IoT devices have been excluded.

As we didn’t want to just push out bug fixes, this release includes a few additions:

Home Assistant support to integrate your Verisure alarms, hygrometers, sensors and thermometers has been contributed by @persandstrom.

It’s time for the August release and there is some serious good stuff this time. The core of Home Assistant has gone some serious clean up and a bump in test coverage thanks to @balloob. If you’re a developer, make sure you read up on the deprecation notices. @fabaff did another great round of documenting all the various components.

The big new addition in this release is the support for the MQTT protocol by @fabaff with some help from @balloob. It will now be possible to integrate any IoT device that talks via MQTT. For the initial release we support connecting Home Assistant to a broker (no TLS yet). Components can now subscribe and publish to MQTT topics and also support for the automation component has been added. For more information, see the MQTT component page.

This release includes some architectural changes by me. The first is that the frontend is now based on a NuclearJS JavaScript backend. This has greatly helped to organize and optimize the frontend code. Another change is that Home Assistant will now install dependencies on-demand instead of installing dependencies for all supported devices.

IP Camera Support James has worked very hard to add support for IP cameras to Home Assistant which is included in this release. The initial release focusses on providing generic IP camera support. This means that any webcam that can exposes a JPEG image via a URL can be integrated.

Home Assistant will route the requests to your camera via the server allowing you to expose IP camera’s inside your network via the Home Assistant app.