The ISY994 is a home automation controller that is capable of controlling Insteon and X10 devices. Some models of the ISY994 can even control Z-Wave devices. The ISY994 controller is manufactured by Universal Devices.

There is currently support for the following device types within Home Assistant:

To integrate your ISY994 controller with Home Assistant, Go to the integrations page in your configuration and click on new integration -> Universal Devices ISY994.

You may also configure the integration manually by adding the following section to your configuration.yaml file:

The username that used to access the ISY interface.

This is the string that is used to identify which devices are to be assumed to be sensors instead of lights of switches. If this string is found in the device name or folder, Home Assistant will assume it is as a sensor or binary sensor (if the device has on/off or true/false states). This is only necessary for nodes that are not automatically detected as sensors by Home Assistant. Insteon door, window, motion and leak sensors should all be detected automatically.

This is the string that is used to identify which Integer or State Variables are to be added as sensors. If this string is found in the device name, Home Assistant will assume it is as a sensor.

Any devices that contain this string in their name (or folder path) will be ignored by Home Assistant. They will not become entities at all and will not fire control_events.

This entry should reflect the version of TLS that the ISY controller is using for HTTPS encryption. This value can be either 1.1 or 1.2. If this value is not set, it is assumed to be version 1.1. This is the default for most users. ISY994 Pro users may likely be using 1.2. When using HTTPS in the host entry, it is best practice to set this value.

If disabled (default behavior), lights turned ON from Home Assistant without a brightness parameter set, will turn on to the on_level set within the physical device. For example, on Insteon devices this would be the same brightness as if the switch/device was turned ON. If this setting is enabled, lights that are turned on from Home Assistant will go to the last known brightness value. Both the on_level and last_brightness values are available as attributes if needed for device-specific customization.

Once the ISY controller is configured, it will automatically import any binary sensors, covers, fans, lights, locks, sensors and switches it can locate.

An Insteon door/window sensor will show up as a single Binary Sensor rather than two discrete devices like it does in the ISY994 admin panel. Note that when in “Two Nodes” mode, the sensor will have an UNKNOWN state until the sensor changes for the first time since the last Home Assistant reboot. If you do not use Insteon scenes that are controlled directly from the door sensor, you may prefer to set the sensor to “One Node” mode using the ISY Admin Panel.

Each Insteon leak sensor will also show up as a single Binary Sensor as opposed to the two nodes seen in the ISY994. The name of the device will be based on what the parent node is named in the ISY994, which is typically the one with “-Dry” at the end of the name. This may be confusing, because “On” means wet in Home Assistant. You can rename this node in Home Assistant to be more clear, see the Customization section of your configuration.

A Home Assistant isy994_control event is emitted for every “control” event in the ISY’s device network (as long as the device has not been ignored or disabled in Home Assistant). This allows you to write automations that trigger based on events such as Insteon button presses. You can also trigger off of the unique Insteon/Zigbee/Z-Wave events, such as double-presses, long-holds etc.

All isy994_control events will have an entity_id and control parameter in its event_data. You’ll need to refer to ISY994 documentation for the list of every possible control type, but the common ones are:

All Insteon scenes configured in the ISY994 will show up as a switch in Home Assistant, as they do not support dimming or setting specific brightness settings as Home Assisstant’s light component.

Insteon Secondary Keypad buttons and Remote buttons are added to Home Assistant to allow support for using Control Events in Automations. These devices are added as sensors since they cannot be directly controlled (turned on/off); their state is the last ON level command they sent, in a range from 0 (Off) to 255 (On 100%). Note: these devices may report incorrect states before being used after a reboot of the ISY. Secondary Keypad buttons may be turned on or off using ISY Scenes (refer to ISY Documentation for more details).

Once loaded, the following services will be exposed with the isy994. prefix, to allow advanced control over the ISY and its connected devices:

Send a “raw” (e.g., DON, DOF) ISY REST Device Command to a Node using its Home Assistant Entity ID. This is useful for devices that aren’t fully supported in Home Assistant yet, such as controls for many NodeServer nodes. Refer to the ISY (or PyISY Python Module) Documentation for details of valid commands.

Send an ISY set_on_level command to a light Node to set the devices’ local On Level.

Send an ISY set_ramp_rate command to a light Node to set the devices’ ramp rate. Refer to the PyISY documentation for the available values.

Set an ISY variable’s current or initial value. Variables can be set by either type/address or by name.

Run a network resource on the ISY.

Reload the ISY994 connection(s) without restarting Home Assistant. Use this service to pick up new devices that have been added or changed on the ISY since the last restart of Home Assistant.

Cleanup old entities no longer used by the ISY994 integrations. Useful if you’ve removed devices from the ISY or changed the filter string options in the configuration to exclude additional items and they were not properly removed by Home Assistant.

Using the Programs tab in the controller’s Administrative Console, custom devices can be created that will appear natively inside of Home Assistant. Home Assistant will scan the following folders and build the device to the associated domains:

A device is created by creating a directory, with the name for the device, under any of the following root directories:

A program, named status, is required under the program device directory. A program, named actions, is required for all program devices except for binary_sensor. Any other programs in these device directories will be ignored. The status program requires that you create a variable with the name of your choice. This variable will store the actual status of the new device and will be updated by the action program.

The status program in this directory is what indicates the state of the device:

The actions program indicates what should be performed for the following device services: 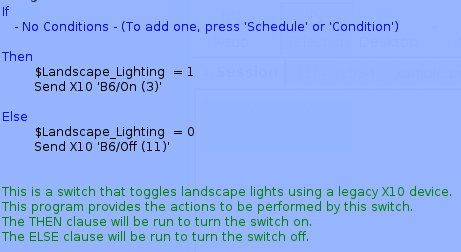 The example program above shows how to control a legacy X10 device from Home Assistant using an ISY controller.