It’s time for Home Assistant 0.90 and it’s just wow. This release is so packed with cool stuff that it’s difficult to even know where to start, so let’s just jump in.

The first big feature is that Home Assistant Cloud now supports remote control. This allows you to check in on your home while away from home. Get a notification that motion was detected? Now you can easily check what happened and take action while away. It works end-to-end encrypted. Only thing needed to get started is to enable it. That’s it.

For more information on how it works, check out the documentation or listen to the latest episode of the Home Assistant Podcast. 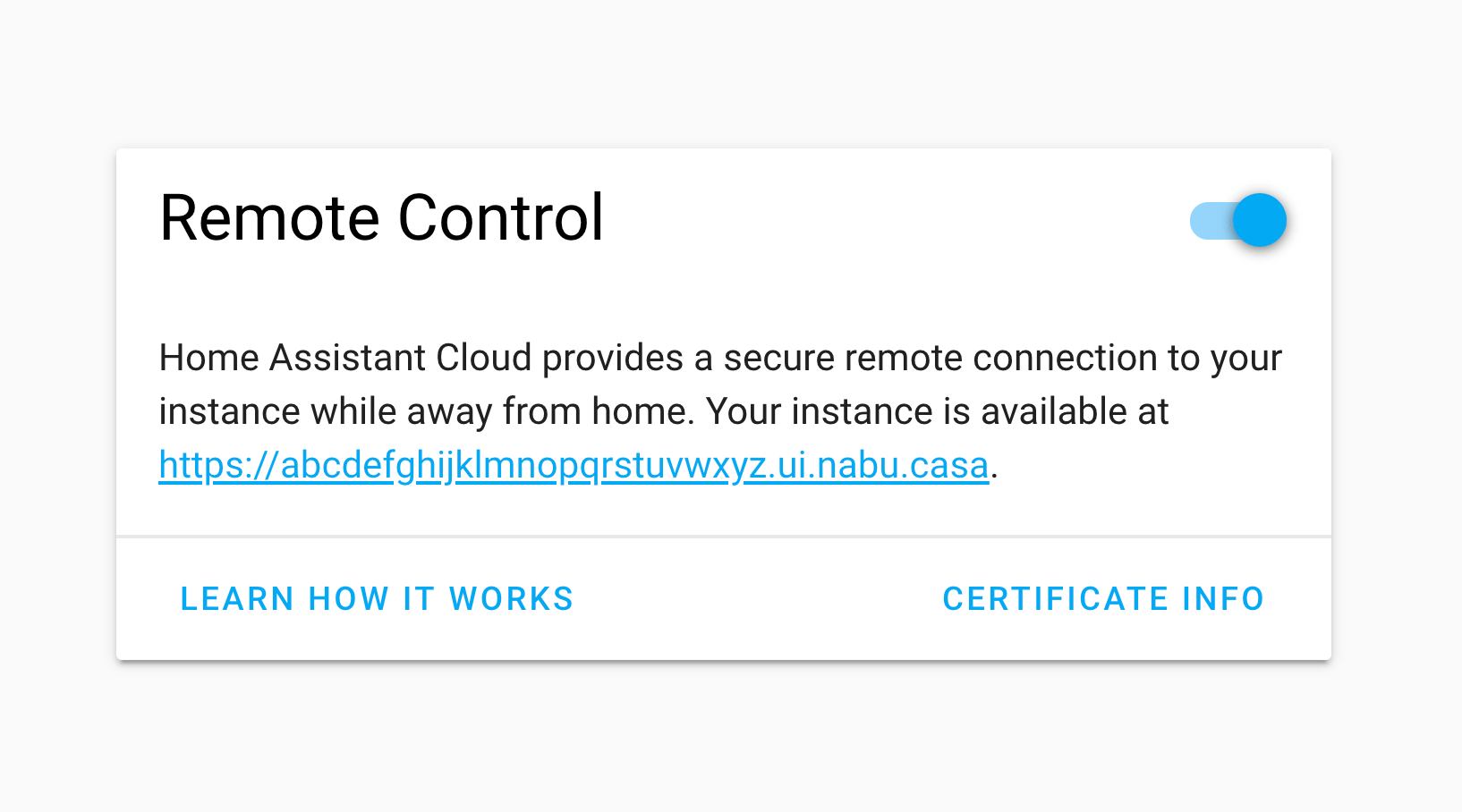 Screenshot of the Remote UI preference.

Camera streams for everyone

With this release we’re getting serious about cameras. @hunterjm has worked months on this and it’s finally ready for the first reveal. With the stream component, we will be able to forward streams from cameras in your house and repackage it into formats that your display devices understand. Previously, streaming cameras was limited to 2 frames per second and only in the frontend. For the first version we focused on the HLS format, which is supported by modern browsers and Chromecast. Each camera integration will need to be individually updated, for the first version we have only added support for the generic camera integration.

So what is possible now? You can start streaming your frontdoor feed on your TV when the doorbell rings or you can install a camera in the nursery and turn your Google Home Hub into a babymonitor.

To get started, add stream: to your configuration.yaml, configure the generic camera and start using the new camera.play_stream service.

Stream any camera on any device.

This has been a long time in the making, and has been worked on for a long time: you can now put users in groups to prevent them from being able to configure things from the UI. Users in the new “users” group will not see links to the configuration panel or to the developer tools. This is currently a UI feature, not a security feature. We’re working on making this a security feature by limiting access at API level too.

If you use Home Assistant Cloud, setting up SmartThings will now automatically leverage Cloudhooks. This means that you will not need to expose your instance to the internet to start using SmartThings. Yay for easy set up and thanks @andrewsayre! SmartThings support has also been added for 3 axis sensors and air conditioners.

This release also adds some more love to areas. Thanks to @Swamp-Ig, areas will now be included as room hints when you sync Home Assistant with Google Assistant. This should make setting up a breeze.

Areas can now also be used as targets in services. Just specify area_id instead of entity_id in your scripts or automations.

We’ve also made areas a part of the set up flow for integrations. When you add an integration, we will check which devices are added and ask you to configure them right away. That way you won’t forget.

In case you missed it, earlier this week Kees Schollaart released the first version of his Home Assistant extension for the free text editor VSCode. It will connect to your instance and will provide you with entity ID autocompletion while editing your config!

This weekend I built a @code extension for @home_assistant! It connects with your Home Assistant host and will provide auto-completion for your entity_id's! Check it out in the Marketplace: https://t.co/21PxCqWrlQ Ideas/feedback more than welcome! Thanks for helping @balloob! pic.twitter.com/la9SPr5Rjw