Home Assistant 0.102 is here ! It’s been quite the trip as we hosted our annual State of the Union last week, which took a lot of energy away from our release. This doesn’t mean that we don’t have anything to share, just that the notes might be a little less polished.

First, we had our State of the Union at the ING office in Amsterdam! It was great. You can watch it back on YouTube or keep an eye out for the blog post coming soon that will summarize all the announcements.

Alright, so what’s new? A lot.

At the State of the Union we announced that we have released the initial version of the official Home Assistant Android app. It’s still a work in progress, but the basic version already works.

It’s been developed by @CedrickFlocon and the source is available on GitHub. We’ve already seen some other developers step in, so that’s great! Keep it coming.

We teamed up with Stanford to tightly integrate their open, privacy-preserving virtual assistant Almond into Home Assistant. For more information, see the separate blog post.

Some companies only allow us to integrate with their products via cloud APIs. These cloud APIs often use the OAuth2 specification to link accounts. The problem with this specification is that it cannot properly handle non-public or decentralized installations.

So if you were to link an integration via OAuth2 before today, you would have to sign up for a developer account, configure Home Assistant and expose your instance publicly before you got to the part where you can link your account. That’s not good!

Home Assistant Cloud is introducing a new account linking service that will be freely available for everyone – no cloud account required. With this service, Home Assistant controls the developer account, and users will just need to link their accounts.

The first integration to use this new service is Somfy. Manual installation is also still possible. This integration is built on top of our new OAuth2 framework. We expect more integration developers to migrate OAuth2 integrations in the future.

As an experimental feature, we have added a new way to create automations. With the help of Almond, we can transform natural language into Home Assistant automations. 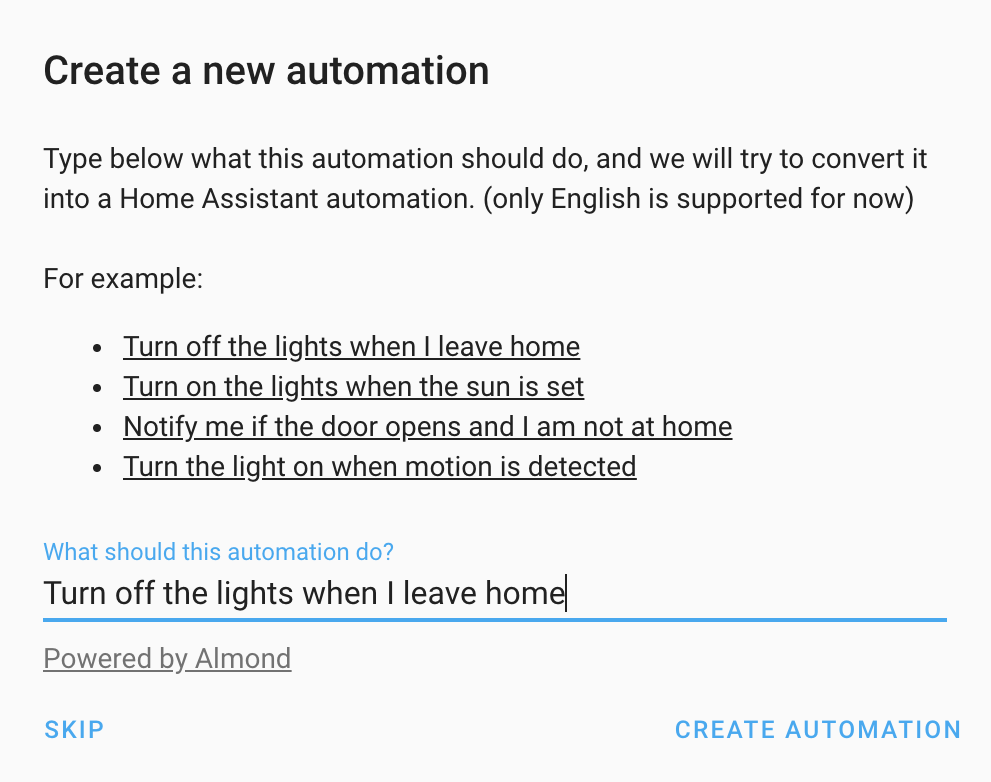 Screenshot of the create automation dialog.

When you click the + in the automation editor to add a new automation, you will see a new dialog where you can enter what you want your automation to do in natural language. Like: Turn on the lights when I come home. We will try to convert this into an automation. We will check if you need to specify devices or persons for this automation and ask you for them. You can then check the generated automation in the editor and save it.

Be advised that not all devices are supported yet, and that Almond needs more training for better responses. Check the Almond part for how you can help make Almond better. 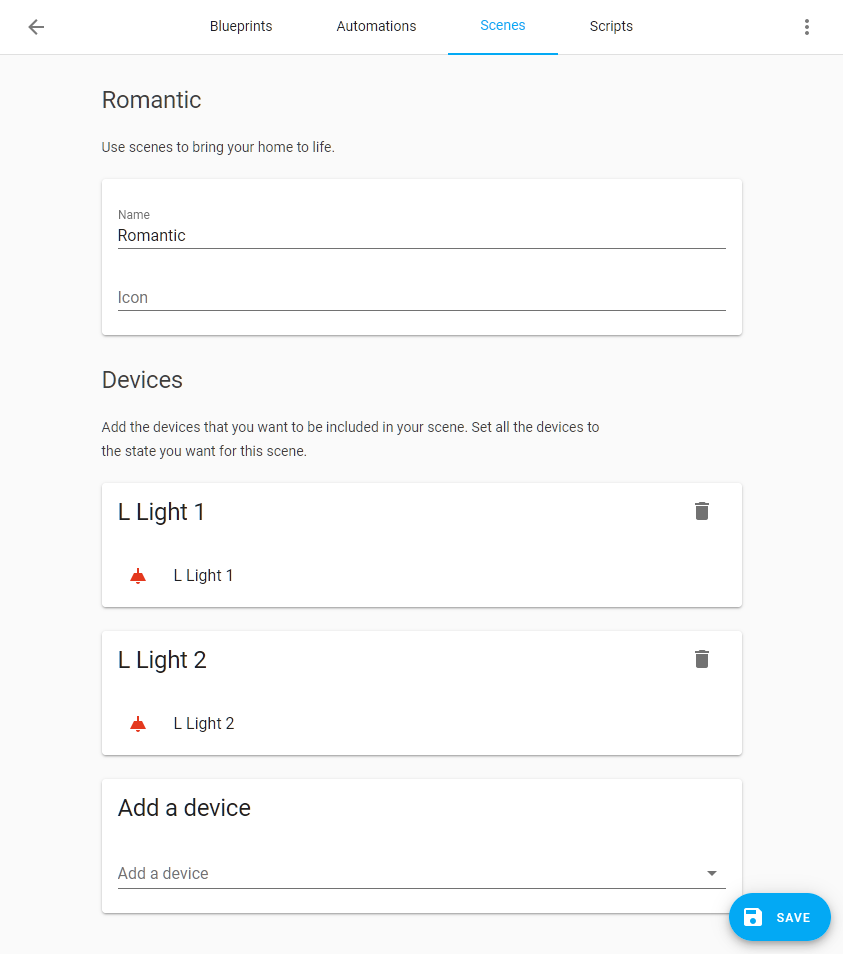 Screenshot of the scene editor.

We’re also introducing a scene editor. With the scene editor you can easily store the states of devices in a scene. You simply select the devices (and/or entities if you are in advanced mode) you want to include in your scene and set the states to how you would like them when the scene activates.

To use the scene editor your scene config should be in the file scenes.yaml in your config directory and included in configuration.yaml. Every scene should have a unique id for the editor to work.

Andrew learned Swift and created a new mini-app for Mac:

Using my new found Swift skills I created a tiny Mac menu bar app to control switches on @home_assistant https://t.co/N7wl2gXd2O
Saves me reaching behind the printer for the awkward power button.
Consider it alpha, I've got a lot to learn on both swift and HA! pic.twitter.com/o6Wm7Le5nm

Our Android app is not the only new app on the block. @tuanha2000vn has released Hasskit, a new app built with Flutter that can be used on both Android and iOS.

And finally, Brad posted a video on Reddit showing his amazing usage of picture elements in Lovelace. Check it out:

Users of Xiaomi Vacuum cleaners can now use this great custom Lovelace card:

This custom card for Xiaomi vacuum cleaners allows you to exactly tell what part of the house your vacuum cleaner has to clean 👏https://t.co/NJtrRLKvDZ pic.twitter.com/iNOOwt5Wxd