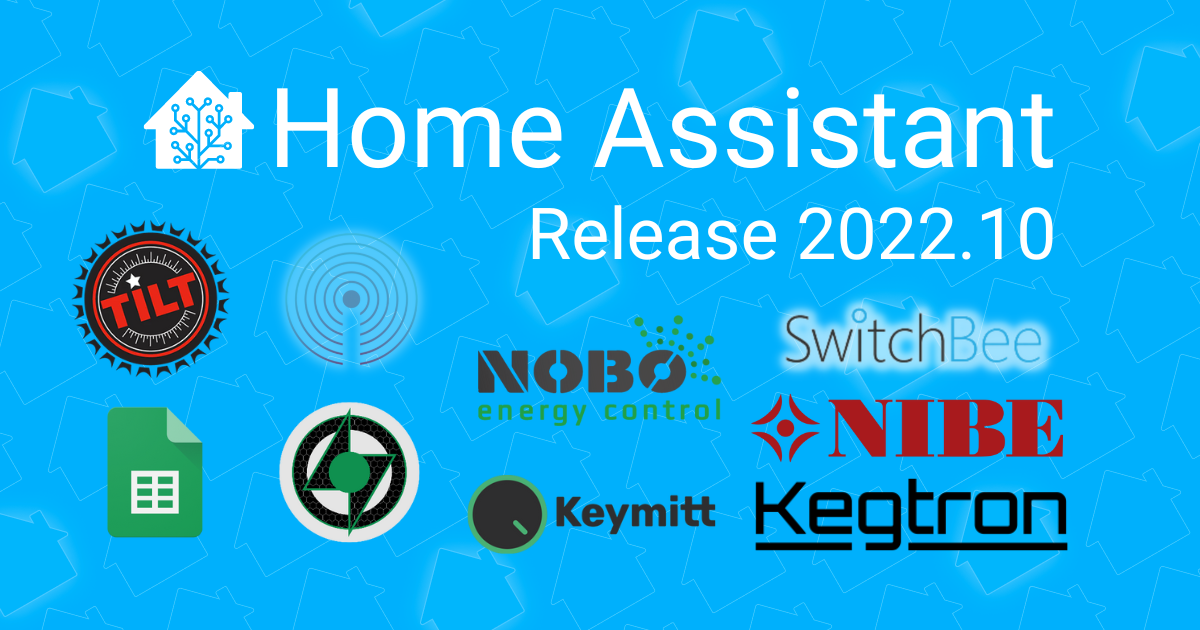 Happy October! October is always a special month for the project. It is the month everybody starts working on their home automations again, the month that Hacktoberfest brings in lots of new contributions and contributors to the project (👋 welcome!), and also this year: the Month of “What the Heck?!”.

The Month of WTH already looks very promising, and many good and interesting issues, ideas, and suggestions to streamline have been proposed. Keep those topics and votes going ❤️.

Last month’s release was a big one; this month’s release mostly continues to improving on that. I guess it is no surprise that the biggest improvement can be found (once again) in Bluetooth! There is a lot more, though this release is a bit “all over the place”, which is actually kinda nice.

PS: I noticed the Home Assistant SkyConnect is now available for pre-order 🥳

We are excited to announce that Marcel van der Veldt has joined Nabu Casa!

Marcel is going to be working on Matter support in Home Assistant. Just in case you missed it, Matter is now officially available/released 🎉.

Two releases back, we introduced the Bluetooth integration. The previous release we brought Bluetooth everywhere in your home by adding support for Bluetooth Proxies. Let’s not stop there!

In this release, those proxies now support active Bluetooth connections! 🤯 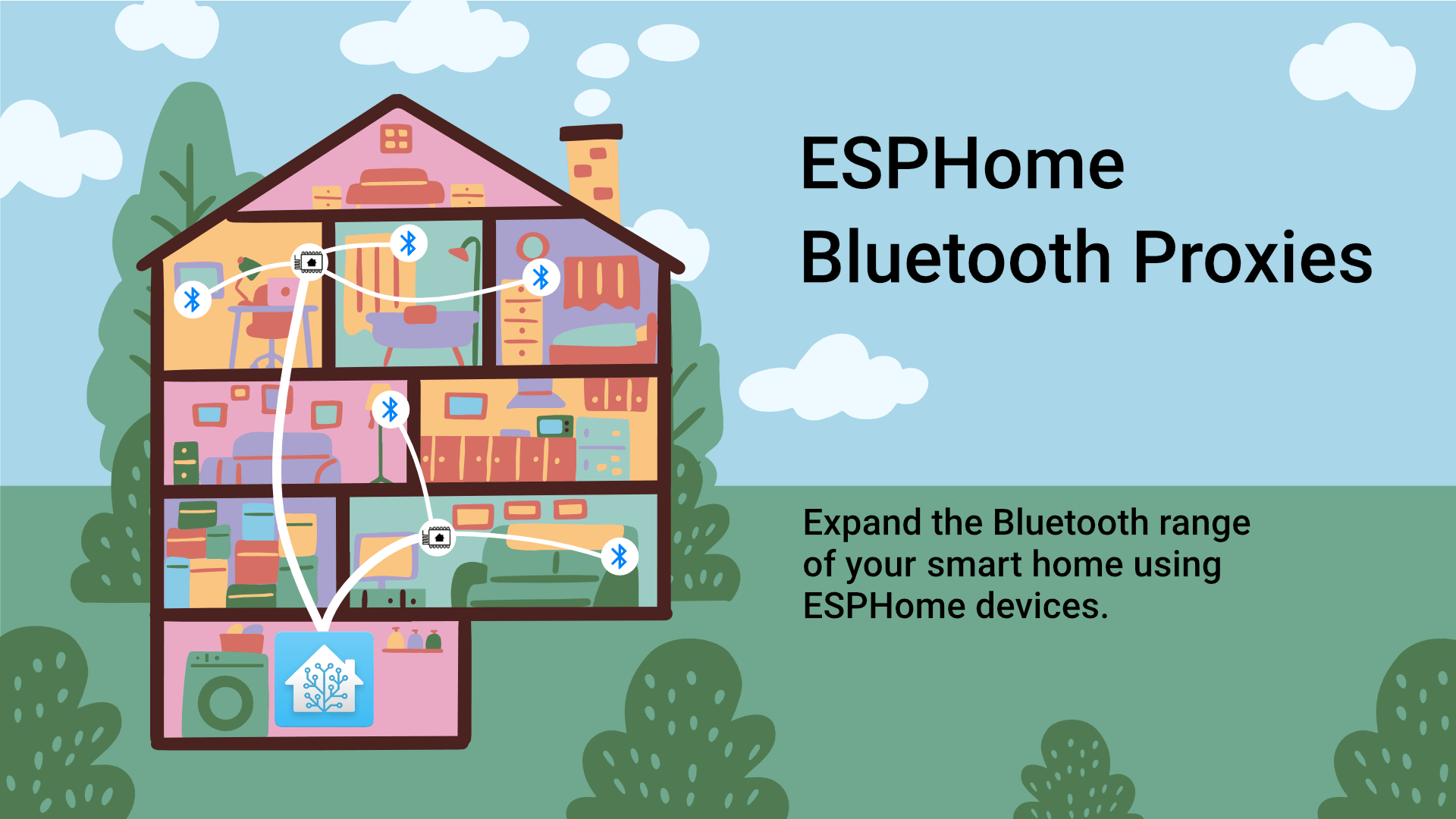 For this occasion, ESPHome will have an additional release, which adds this functionality. We have also updated our Bluetooth proxy installer website to install with support for active connections.

So, you want to control that SwitchBot Bluetooth device on the other end of your home that seems out of reach? Now you can by installing a proxy on a simple ESP32 device.

Oh! Bonus: the Bluetooth performance has been improved too! Especially local Bluetooth adapters should be quite a bit faster. 🚀

This release also adds support for iBeacons. These are Bluetooth-enabled devices that send out identifiers to announce their location. Home Assistant can now pick those up and show an approximate distance to such an iBeacon.

iBeacons can open up a lot of awesome use cases for automations. For example, you could attach an iBeacon to your car, so you’ll know the car is at home. Or, on the trash can and use it to determine if the garbage is still sitting in the garage on pick-up day and send out a notification.

Read more about iBeacons in our documentation.

Recently we introduced “Supported brands”, allowing you to find integrations available under different brandings. Now, we are taking it a step further streamlining the experience of adding new devices or services.

For some brands of devices, we have multiple integrations available. For example, we have a lot of “Google” integrations. Some brands provide devices that can work via Zigbee or their matching hub, meaning you’d have a choice of integrating their hub or using the devices directly via Zigbee (e.g., using ZHA).

To make it more clear on the choices available, you can now categorize integrations by brand. Home Assistant will show the options available for that specific brand. For example, the “Google” brand: 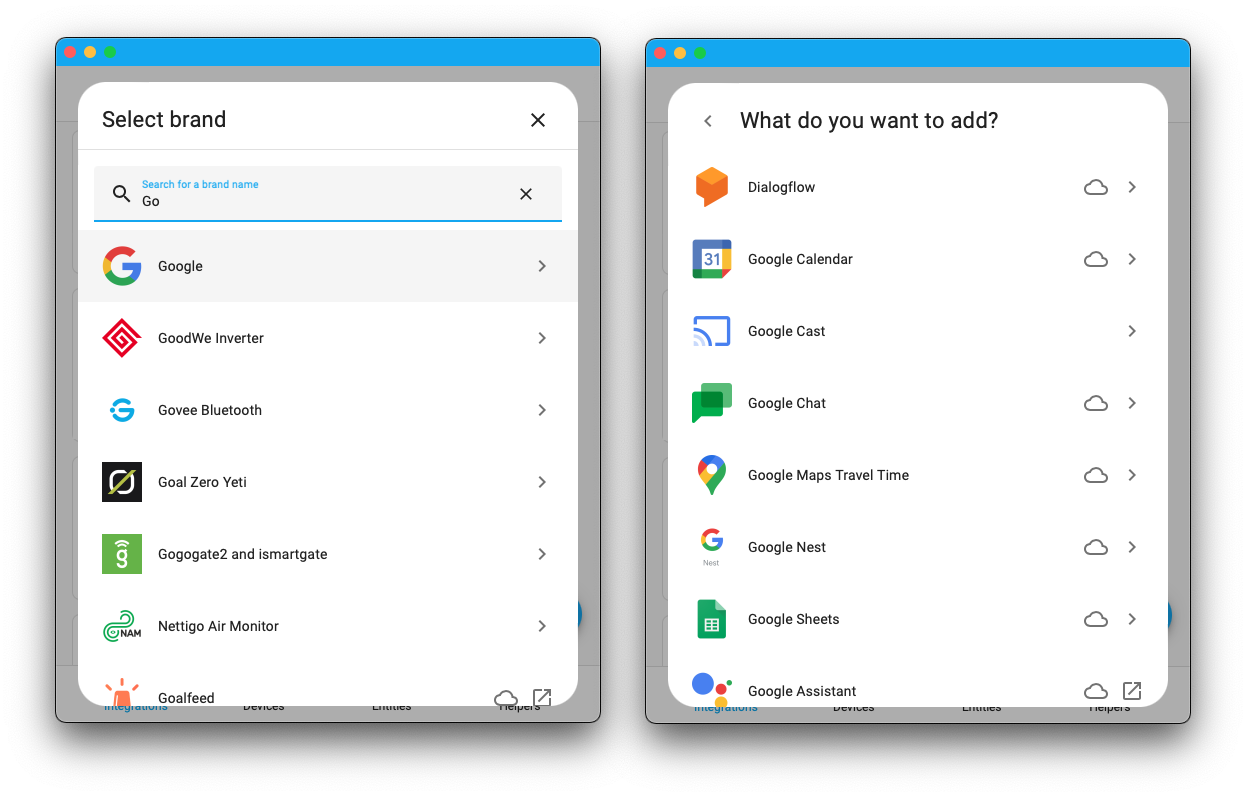 This way, you no longer have to “find out” how your device could be integrated. We now show if an integration uses “the cloud” or not, so you are aware upfront.

We often get questions about YAML-only integrations that cannot be found in the user interface. While we love them to be available via the UI, we can understand not finding them at all can be confusing.

To help with that, we now show all integrations when adding a new integration, including those only available via YAML. While they cannot be set up via the user interface, we now do provide links to the documentation with the instructions on how to set it up.

This might be one of the coolest and most impactful features that has been added to our Dashboards lately: Subviews!

Each view on a dashboard can now be marked as being a “Subview”: 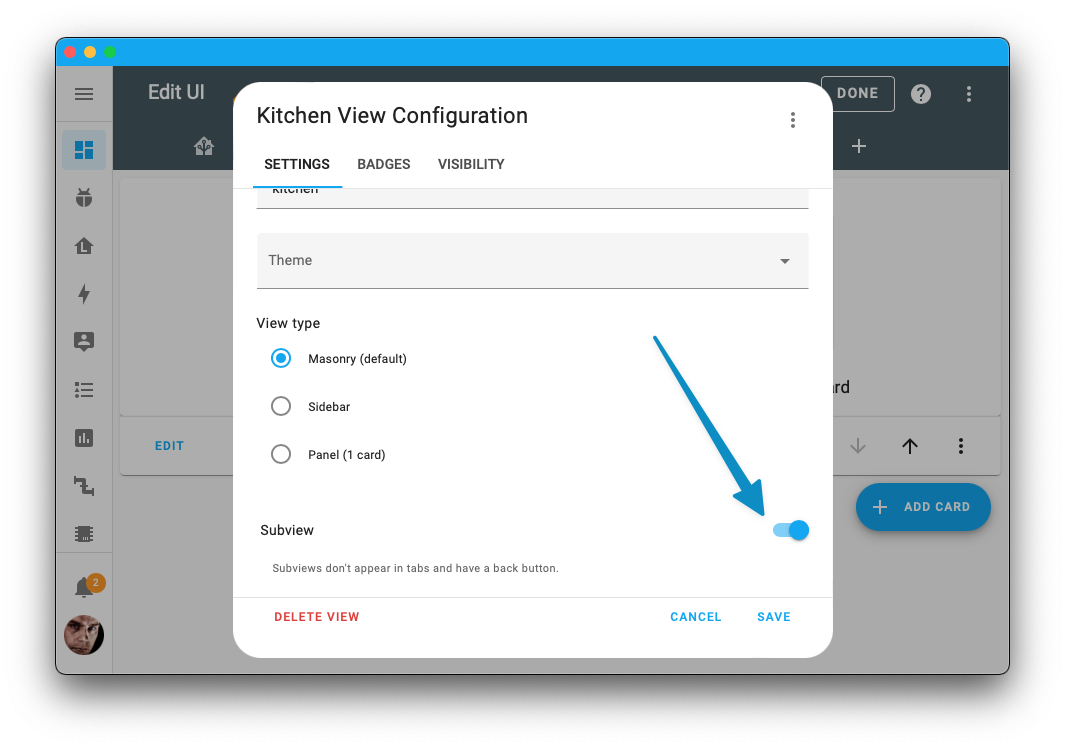 Subviews won’t show up in the navigation bar of your dashboard, meaning you can only navigate to them by using, for example, a navigation action on a button.

When you navigate to a subview, the subview itself will not show the Dashboard navigation bar. Instead, it will show a back button to the previous view you came from.

This allows for creating cool navigation concepts that are particularly helpful on a mobile or tablet device.

All dialogs that are shown in the Home Assistant have been slightly updated.

Most notably: The dialogs are now rounder on the edges, and the action buttons have been styled and named more consistently. It brings Home Assistant closer to version 3 of the Material Design that Home Assistant follows. 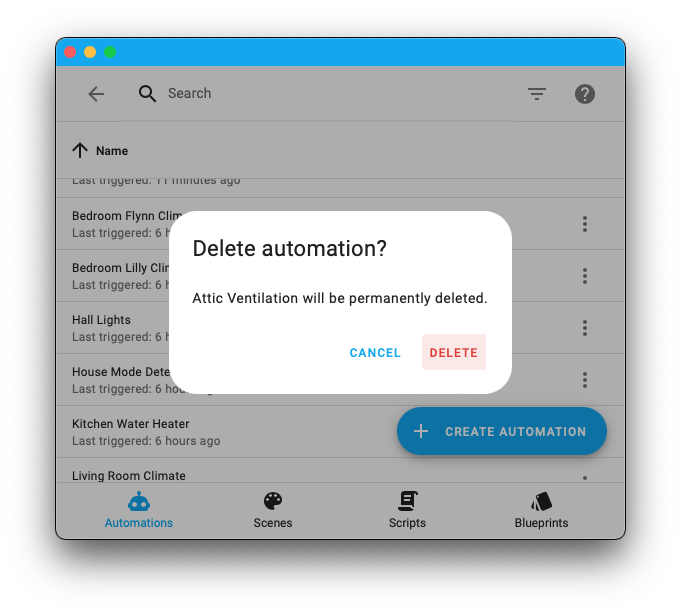 In the last release, we revamped our automation editor, and we are very happy to read how many of you loved these changes ❤️

However, if you manage your automations manually in YAML, you’d always be served an error message when trying to open an automation in the UI. Not very helpful, right?

This has been improved! You can now open any automation (or script) in the UI. This lets you view your automation, providing a quick glance at its workings. 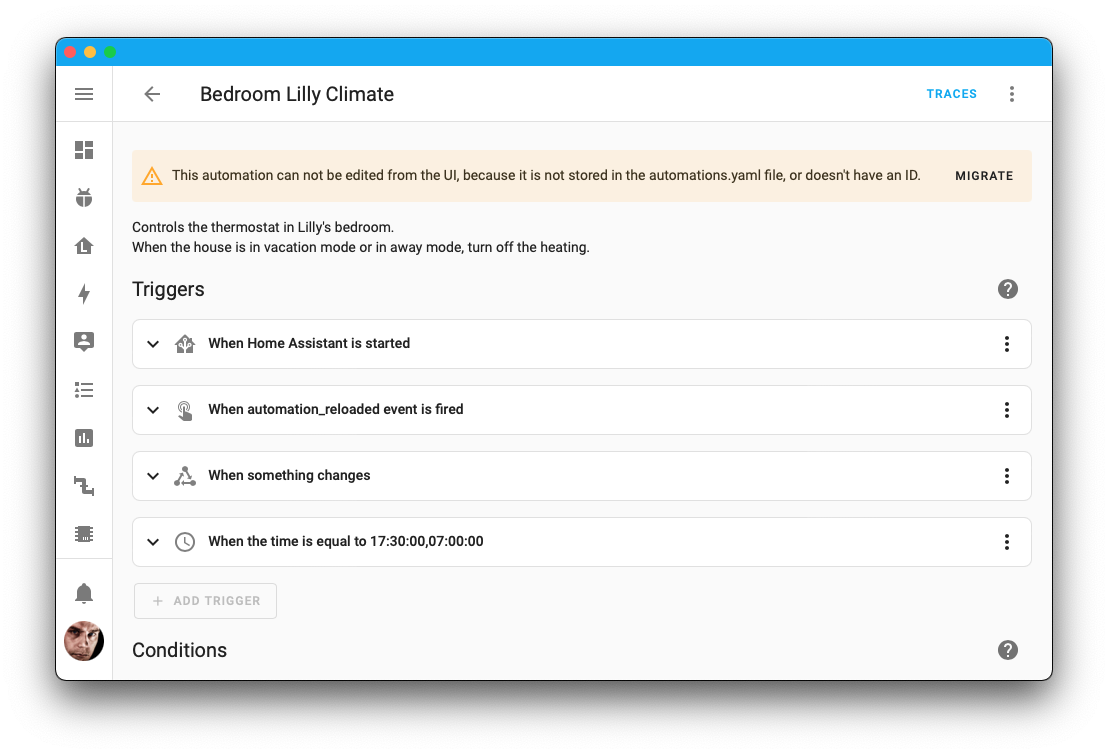 Besides, as a bonus, if you have considered moving your automation to the UI, you can now view and experience how it would look/work for those automations and import them into the UI with the click of a button in the top right.

A new version() template function/filter has been added, allowing you to do awesome things with version numbers in templates.

It allows for getting information about a version number, comparing version numbers, and even checking the difference between two versions.

version() can be helpful when building automations or Blueprints for update entities. You could, for example, easier decide to automatically upgrade or send more detailed notification messages in case a patch version is available.

With this integration, you can add new rows to a Google Sheet document from a service call, allowing you to export data from automations for further processing, visualization, or insights. 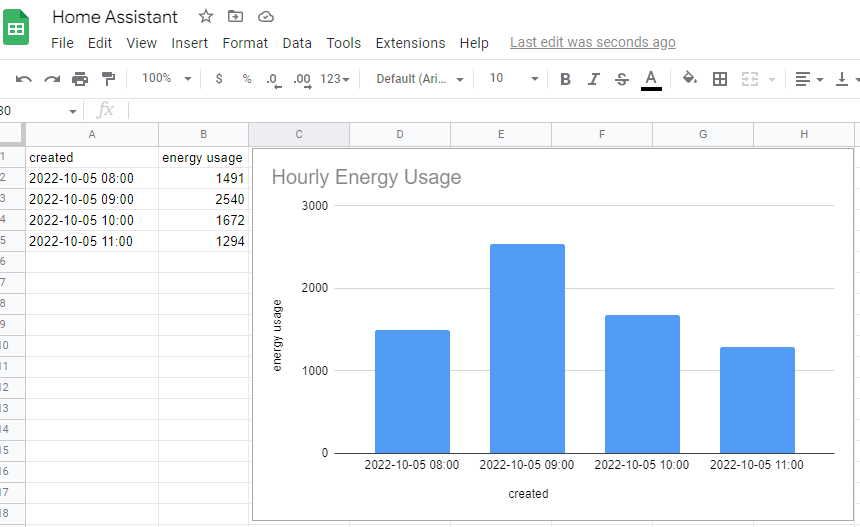 Maybe you like to export your daily energy usage or keep track of the number of diapers you have used in your baby feeding diary spreadsheet.

The possibilities with this are endless.

There is much more juice in this release; here are some of the other noteworthy changes this release:

We welcome the following new integrations in this release:

Home Assistant has a great community of users who are all more than willing to help each other out. So, join us!

Our very active Discord chat server is an excellent place to be at, and don’t forget to join our amazing forums.

Found a bug or issue? Please report it in our issue tracker, to get it fixed! Or, check our help page for guidance for more places you can go.

Are you more into email? Sign-up for our Building the Open Home Newsletter to get the latest news about features, things happening in our community and other news about building an Open Home; straight into your inbox.

prob_given_false is now a required configuration variable. Previously it had a default value of 1 - prob_given_true; this didn’t really have any mathematical basis and so has been removed. You can use this documentation to calculate what it should be, or to restore your previous functionality, set it to 1 - prob_given_true.

The logic of Bayesian sensors has been significantly corrected. Previously the configs given in the examples above would not have worked as expected. For example, if the device device_tracker.paulus was home, this would not have updated the probability that Paulus Home was on. This is because Bayesian ignored observations that were false, even though that should update our probabilities.

Because of this, many users will have had to use either of two workarounds:

To solve (1), all you need do is delete the mirrored entry as shown below:

To solve (2), you need to re-estimate your probabilities using this documentation - this will likely result in better performance in the long term.

A hacky and not recommended workaround to restore your previous functionality would be to put in a mirrored entry for each observation where prob_given_false is equal to prob_given_true. This will induce the same behavior as before - the negative, counterfactual observation is essentially ignored. Be warned - this may break or cause errors in future versions and will not work for template or numeric_state observations. For templates, instead, make them return None where they would have returned False to induce Bayesian to ignore them.

When the player is grouped and isn’t master, the state no longer reports as “grouped” but instead reports as “idle”.

The previously deprecated guardian.reboot and guardian.reset_valve_diagnostics services have been removed and replaced by button entities on the guardian valve controller device.

When the player is loading, the state no longer reports as “opening”, but instead reports as “buffering”.

The previously deprecated YAML configuration of the HERE Travel Time integration has been removed.

When the player is not active, the state no longer reports as “problem”, but instead reports as “off”.

Some breaking changes have been made in disabling the Movies count sensor out of caution. This sensor can cause problems with massive databases. If you still wish to use it, you may do so.

Movie names are no longer included as attributes in the movies sensor. Upcoming has been removed. It is being modernized as calendar items should be. Diskspace is now split into different sensors, one for each folder. Status and commands have been removed as they don’t appear to have real value for automations.

In Home Assistant 2022.4, the binary sensors for showing an update from the Supervisor integration were deprecated in favor of update entities.

These binary sensors for showing an update have now been removed.

In Home Assistant 2022.4 the binary sensor of Synology DSM for showing an update was deprecated in favor of the newer update entity.

This binary sensor for showing an update has now been removed.

Due to changes in the upstream library, the following is no longer supported by the Workday integration:

With this release, you will need to update your zwave-js-server instance.

This may change which fan speed is selected at certain percentages. You should adjust any automations and scripts that target these devices as needed.

If you are a custom integration developer and want to learn about breaking changes and new features available for your integration: Be sure to follow our developer blog. The following are the most notable for this release:

The following integrations are also no longer available as of this release:

Of course, there is a lot more in this release. You can find a list of all changes made here: Full changelog for Home Assistant Core 2022.10