It is well known that you are either a good programmer or a good designer. It’s rare you’ll meet someone that is both. That’s why it wasn’t surprising to anyone that the logo that I made was mediocre — at best. Luckily, Jeremy Geltman has come to the rescue and contributed a brand new logo for Home Assistant.

The new logo follows Googles material design spec. It uses the blue color that Home Assistant uses in the interface and it comes in two versions: a high detailed version (for homescreen icon etc) and a simple version (for favicon etc).

The old logo, the new detailed logo and the new simple logo.

The new file is named configuration.yaml and if it can’t be found in your config directory, Home Assistant will instead try to find the old configuration file, home-assistant.conf.

Users of Home Assistant should migrate as the old configuration format is deprecated.

Home Assistant has learned a new trick to get the latest information from the server: streaming updates. No longer will the frontend poll every 30 seconds for updates but instead it will keep a connection open and get the latest changes pushed as soon as they happen.

A new toggle has been added to the sidebar to turn streaming updates on and off. This preference will be saved on a per-browser basis using local storage. The toggle will also indicate when there is an error setting up a stream after which it will fall back to use polling. 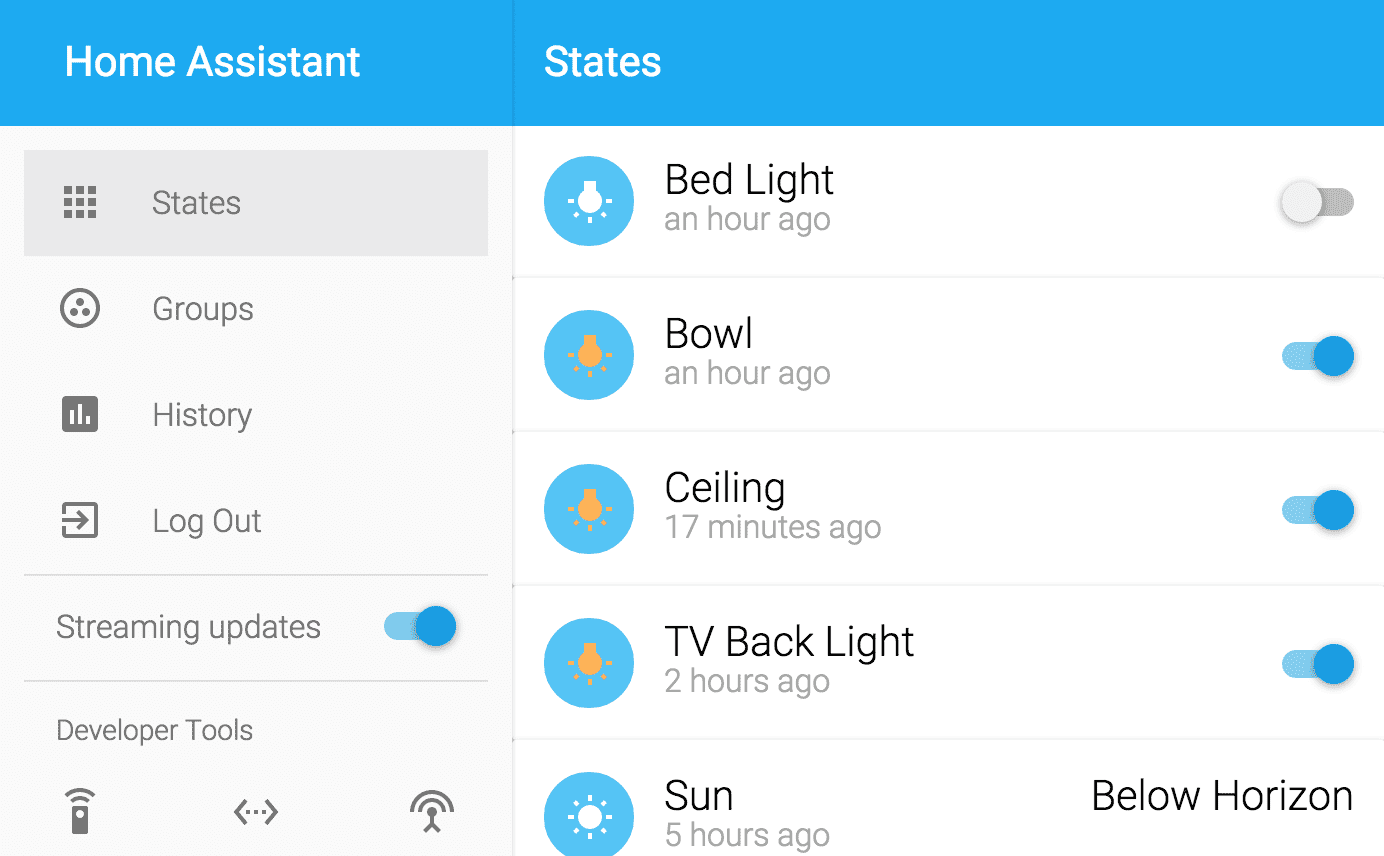 Ever since the launch of Home Assistant you have been able to track the state of your house. But the view has always been limited to what the current state is. Not what it was. Today we are going to change that by introducing two brand new components:

By adding this view into the past, we are adding an extra dimension into the state of your house. This brings great new possibilities for future features. The focus of today’s release is on getting the recording component to you to start recording and getting some data. To show what is being recorded a view has been added that shows the last 24 hours of your house. Expect more extensive tools to explore your history in the future.

Adding history to the UI was a challenge on itself because the old UI did not support easy navigation. So to add to the awesomeness of this release, Home Assistant also got a face lift.

The history component will be enabled for new users by default. For current users, run scripts/update to upgrade to the latest version and add [history] to your home-assistant.conf file. Events are saved in a local database. Google Graphs is used to draw the graph. Drawing is happening 100% in your browser - no data is transferred to anyone at any time.
Read on →
← Older Newer →