The group integration lets you combine multiple entities into a single entity. Entities that are members of a group can be controlled and monitored as a whole.

This can be useful for cases where you want to control, for example, the multiple bulbs in a light fixture as a single light in Home Assistant.

Adding Group to your Home Assistant instance can be done via the user interface, by using this My button:

If the above My button doesn’t work, you can also perform the following steps manually:

By default, when any group member entity is on, the group will also be on. A complete overview of how groups behave:

To edit a group, Settings -> Devices & Services -> Helpers. Find and select the group from the list. 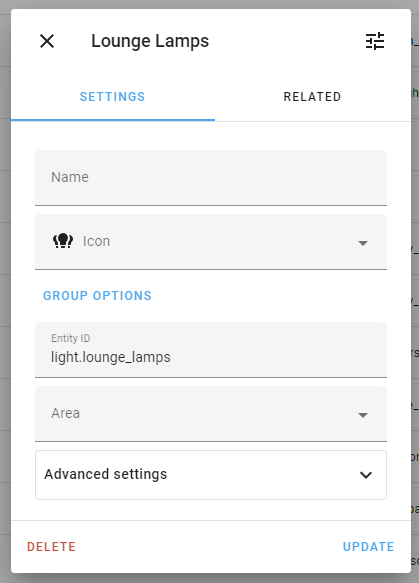 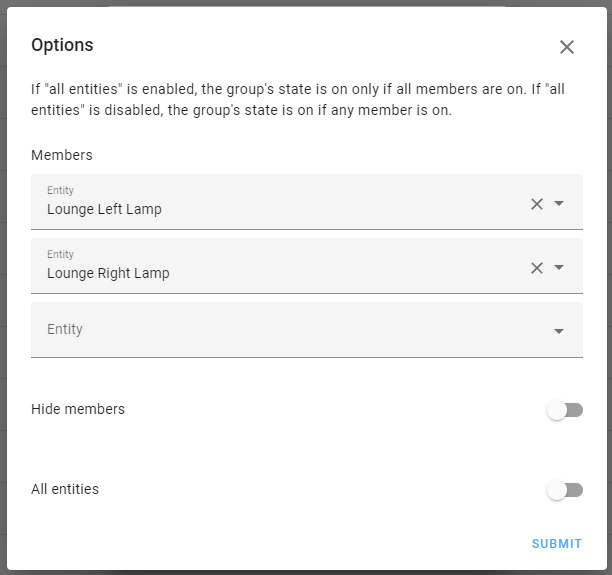 Alternatlively, this integration can be configured and set up manually via YAML instead. Here are example of how to configure groups when using the configuration.yaml file.

A list of entities to be included in the group.

The name of the group.

An ID that uniquely identifies this group. If two groups have the same unique ID, Home Assistant will raise an error. Giving an group a unique ID allow the group name, icon and area to be customized via the UI.

Only available for binary_sensor, light and switch groups. Set this to true if the group state should only turn on if all grouped entities are on.

This group is a special case of groups currently only available via YAML configuration.

Notify groups are used to combine multiple notification services into a single service. This allows you to send notification to multiple devices with a single call.

Setting the parameter name sets the name of the group.

A list of all the services to be included in the group.

The service part of an entity ID, e.g., if you use notify.html5 normally, just put html5. Note that you must put everything in lower case here. Although you might have capitals written in the actual notification services!

A dictionary containing parameters to add to all notify payloads. This can be anything that is valid to use in a payload, such as data, message, target or title.

This group is a special case of groups only available via YAML configuration.

Back in the day, Home Assistant used groups to visually groups entities in the Home Assistant UI; it was the only way to tell which entities would show up in a single card on your Dashboard. This is no longer the case, as we now have fantastic UI editors and Dashboarding.

However, the old-style groups are still there in the roots of Home Assistant. On the one hand, they are more versatile (they can use more entity types right now); but on the other hand, they are also more limited and complicated to use.

The limited use is that these old-style groups are written to be universal, while the new style groups described above are designed to be a full replacement of their members (e.g., a light group, as described above, has all light features). Besides being only available via manual YAML configuration, they also have limited UI support in terms of customizing.

Name of the group.

Set this to true if the group state should only turn on if all grouped entities are on.

The icon that shows in the front end.

Old style groups can calculate group state with entities from the following domains:

When member entities all have a single on and off state, the group state will be calculated as follows:

When a group contains entities from domains that have multiple on states or only use on and off, the group state will be on or off.

It is possible to create a group that the system cannot calculate a group state. Groups with entities from unsupported domains will always have an unknown state.

This integration provides the following services to modify groups and a service to reload the configuration without restarting Home Assistant itself.

The Group helper was introduced in Home Assistant pre 0.7, and it's used by 63% of the active installations. Its IoT class is Calculated and scores internal on our quality scale.
View source on GitHub
View known issues