It’s that time of the year. The time when it’s cold outside, it’s cozy and warm inside, we’re spending time with friends and family, and time for big companies to drop local accessible technology (2015, 2018).

On November 20, 2019, Sonos announced that they had acquired Snips earlier that month. Snips was a popular option for people to get local voice control in their homes.

In the same month of the acquisition, Snips has announced that they are shutting down their console for users. The console allows users to train their system with custom sentences and intents. By shutting this down, it is no longer possible to make any changes to your local Snips system. 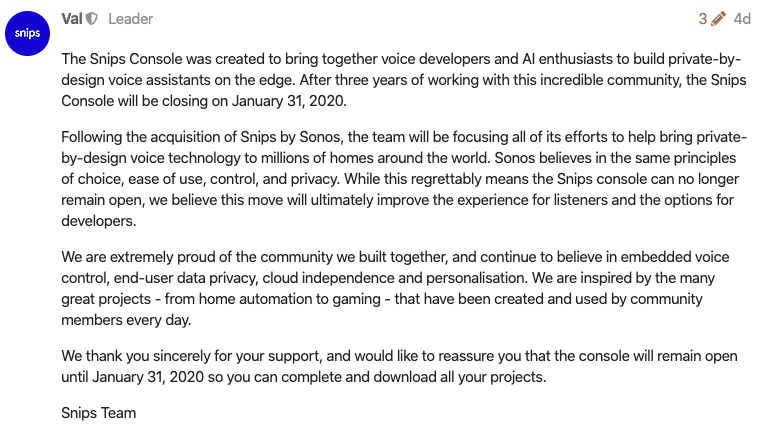 Announcement on the Snips forums.

What is actually worse, is that it looks like they are not shutting down their console completely, they are just shutting down public access. They could support users, but actively decide not to do so. It seems like they don’t want us to know this, as they have edited their announcement on the forums. 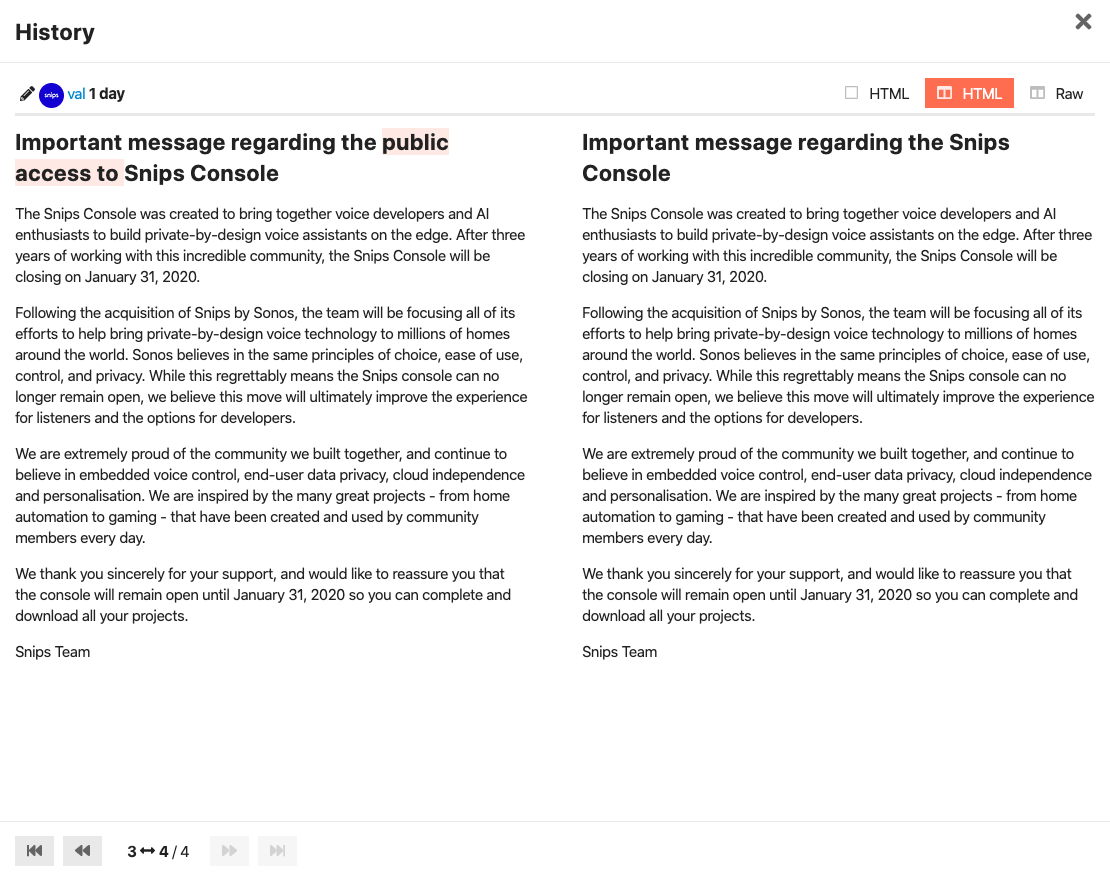 Edit history of the announcement shows they removed the words "public access to".

Voice control, powered by Snips, might show up in future Sonos devices. However, Sonos is not accessible to many people out there. The customizations will also be lost according to Patrick Spence, the CEO of Sonos, in an interview with Variety:

“We are not building an ask-anything assistant,” Spence said. Instead, the goal of the acquisition was to build something a lot more music-specific.

A very bad move by Sonos. This is not a world in which it’s Sonos vs. Google vs. Amazon. It is not even a fight just about smart speakers, it is a fight about if the audio system in our house is local and private, or not.

By taking Snips off the table, there is one less option for local voice control. These users will now look for alternatives, which will include cloud options.

Technology often ends up with a winner takes all. Sonos has just made a better case for its competitors, again.

What the local home needs

Audio is an essential part of our homes. We want to play music, be notified of events (i.e., doorbell) and we want to be able to use our voice to control our devices. A system that provides this, needs to run locally and be accessible via an open API.

Sonos could be this system, they have great hardware that works together nicely. However, they are keeping their API tightly controlled, making it impossible for a user to build on top of it.

It is a choice. They could keep the Snips console open to the public, open up their modern local API and embrace the community that cares about local control. Nevertheless, they choose to work against it.

So Sonos, why are you?